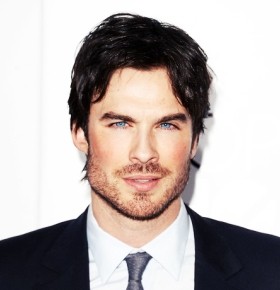 Actor, Television Star, and Celebrity Speaker Ian Somerhalder got his big break in 2004 when he was cast as Boone Carlyle in the award winning ABC series, Lost. Somerhalder starred in the show until it’s conclusion in 2010 alongside fellow actors Matthew Fox, Evangeline Lilly, and creator J. J. Abrams. From there, Ian went on to star as one of the three main characters in the popular vampire series The Vampire Diaries on The CW. The show follows the love triangle between Elena Gilbert, played by actress Nina Dobrev, as she falls in love with vampire brothers Damon Salvatore, played by Somerhalder, and Stefan Salvatore, played by actor Paul Wesley. For his work on The Vampire Diaries, Ian Somerhalder has received several awards including Teen Choice Awards for Choice TV Villain, Choice TV Actor Fantasy/Sci-Fi, and Choice Male Hottie. In 2014 he also won his first People’s Choice Award for Favorite Sci-Fi/Fantasy TV Actor and another for Favorite On Screen Chemistry (shared with Nina Dobrev).

Prior to his lead roles in Lost and The Vampire Diaries, Ian Somerhalder guest starred in several television programs including CSI: Crime Scene Investigation, Law & Order: Special Victims Unit, Smallville, and Tell Me You Love Me. He also starred in numerous films including TheRules of Attraction with fellow actors James Van der Beek and Jessica Biel, and the film Pulse which also starred famous actors Kristen Bell, Christina Milian, aRon Rifkin, and Octavia Spencer. Somerhalder has been a guest on talk shows such as Late Night with Jimmy Fallon, Chelsea Lately, ABC’s Good Morning America, and Live with Kelly and Michael.

Also a philanthropist, Celebrity Speaker Ian Somerhalder uses his fame to bring attention to causes, supporting several organizations including the St. Tammany Humane Society which supports animal shelter and welfare as well as the It Gets Better Project which aims to stop suicide among LGBT youth. In 2010, Ian launched his foundation, Ian Somerhalder Foundation, with the hopes to educate people on the importance of protecting the environment and animals.