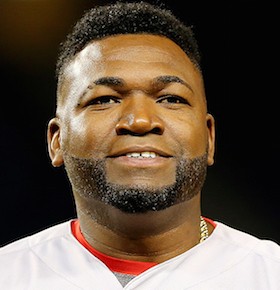 Boston Red Sox designated hitter David Ortiz, who is more affectionately known as “Big Papi,” recently won his third World Series with the team defeating the St. Louis Cardinals in 6 games. David was named MVP of the World Series after yet again another impressive playoff hitting display to go along with his American League Championship Series MVP from 2004. David plays the game with passion and sportsmanship and has become a role model for many in both the United States and around the world.

Sports speaker David first broke into Major League Baseball with the Minnesota Twins before being traded to the Red Sox where he has remained since 2003. He is the all-time leader in hits by a designated hitter in Major League Baseball history, and occasionally plays first base when needed. The Sporting News Magazine recognized him as the Designated Hitter of the Decade while Sports Illustrated Magazine named him to the All-Decade team. He currently holds the record for most home runs in a season by a Red Sox at 54. David has pulled in over $4.5 million in endorsements throughout his career, including his own cleat released by Reebok. In 2009 Big Papi opened his own restaurant and nightclub called 40/40 in the Dominican Republic.

Off the diamond David gives back to his community through The David Ortiz Children’s Fund, which partners with Heart Care Dominicana, the World Pediatric Project, and Massachusetts General Hospital to raise money for critical care services for children in David’s home country of the Dominican Republic and northeastern United States. David was recognized by UNICEF in 2008 as the recipient of the Children’s Champion Award for his work with children through his charity.  He was also awarded the Roberto Clemente Award, given to the MLB player that best exemplifies sportsmanship, community involvement and individual achievement in the game of baseball.