Sports Speaker Chris Carpenter’s pro career began with the Medicine Hat Jays and made his major league debut with the Toronto Blue Jays against the Minnesota Twins in 1997. After much success, Chris faced many injuries in the 1999 season with only 24 starts, but went on to a much better season in 2001.

The St. Louis Cardinals signed Chris Carpenter before the start of the 2003 season, in hopes he would be in full force by mid-season. Unfortunately, he sat out the entire 2003 season due to a torn glenoid labrum, but came back stronger than ever in 2004 to help the Cardinals win the National League pennant. After missing the 2004 World Series due to injuries, he came back to the 2005 season with his best year to date. Yet another injury starting the 2007 season having Tommy John surgery, things were not looking positive for the 32 year old. After 12 months he finally made his first Major League start on July 30, 2008. Throughout the 2011 season, Chris held the Cardinals franchise record for the highest winning percentage by a starting pitcher. Chris pitched six innings in Game seven of the 2011 World Series to clench the win over the Texas Rangers to win the 2011 World Series.

After two injury-plagued seasons, producing three successful seasons seemed like a great comeback. Unfortunately he had to have yet another surgery due to thoracic outlet syndrome. After an intense surgery that required removal of his first rib and other serious muscles and nerves, the doctors predicted a six month recovery time meaning he would miss the entire 2012 season only to return the following year for spring training. Through hard work and determination Chris defied expectations when he returned to the mound in a game against the Cubs in September. Battling shoulder pain throughout the 2013 season, Chris tried over and over again to get the chance to play in a game, but the pain was just too much.

His body and mind seemed to be on different pages and in a press conference in February he said he refused to talk about retirement. His last two starts in professional baseball were with the minor league, but he was shut down due to discomfort. With resistance and fight Chris’ body just couldn’t take it anymore and he was forced to retire in November 2013. Chris has showed what it truly means to over come obstacles and always work hard for what you want, with this determination Chris was awarded three different Comeback Player of the Year awards in two different seasons. Chris Carpenter is available for speaking engagements, sporting events, and sports clinics. 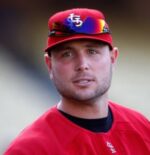