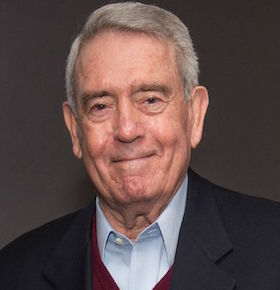 TV Journalist Speaker Dan Rather is a celebrated member of the American media. He is the former news anchor for the CBS Evening News and worked as a part of the CBS news team for 43 years until 2006. He was also well-recognized as a correspondent for CBS’s investigative reporting show, 60 Minutes. Dan now owns and operates his own TV news magazine called Dan Rather Reports which airs on AXS TV. In 2015, Dan was a featured in a moderated Q&A interview at the South by Southwest Festival. He was interviewed on the topic of news dissemination in this new digital era with more channels for quick access to breaking news.

A Texas native, Dan got his feet wet as a reporter for the Associated Press and the United Press. He got his first experience as a TV journalist as a reporter for the local ABC affiliate in Houston and later took a job as the director of news for the local CBS affiliate. While reporting on Hurricane Carla in 1961, Dan created his own radar display to capture the size of the storm. He was the first to create a visual meteorological surveillance radar that has now become standard for weather reports.

CBS was impressed and this creativity earned him a spot as an official CBS News correspondent. TV Journalist Speaker Dan was stationed in Dallas and was the first to report the assassination of JFK to the public for CBS. His professionalism and strong reporting during this national incident earned him a promotion as CBS’s White House correspondent. He was on hand to cover the Watergate scandal in the early 70’s. From 1981-2005, Dan served as the lead anchor on the CBS Evening News.

TV Journalist Speaker Dan Rather covered a multitude of special events and news stories while becoming a regular guest on other news programs including The Chris Matthews Show.

He has received 7 Peabody Awards for his work in the journalism field.