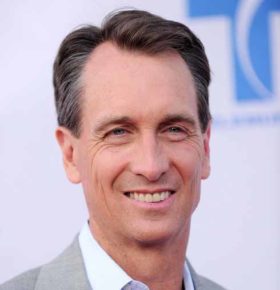 Motivational Speaker Cris Collinsworth is a former NFL wide receiver that has blossomed into a leading play-by-play commentator for NBC’s NFL TV broadcasts as well as an NFL analyst on Showtime and the NFL Network. He has won a total of 15 Sports Emmy Awards for his work on-air. In 2015, Cris and his regular broadcast partner Al Michaels were chosen as lead play-by-play commentators for Super Bowl XLIX.

Motivational Speaker Cris Collinsworth was an all-American wide out at the University of Florida before playing 8 seasons in the NFL for the Cincinnati Bengals.

He was a 3-time Pro Bowler and helped lead the Bengals to 2 AFC Championship Titles in 1981 and 1988. After retiring following the 1988 season, Cris started his broadcasting career as a reporter for the HBO series Inside the NFL. The following year he began his lengthy career with NBC and their NFL broadcasts, eventually joining the pre-game show in 1996. It was in 1998 that he would also join the NFL on Fox teamto appear on the network’s pre-game show and as a broadcaster. More recently in 2006, Cris took over NBC’s Sunday Night football coverage only to be promoted to play by play broadcasting alongside Al Michaels in 2009. NBC took notice of his skills on air and employed him alongside Bob Costas as a color commentator for the Olympics in 2008 and 2010.

Cris takes pride in being able to use his fame to help others. He founded the Cris Collinsworth ProScan Fund to help raise breast cancer awareness and support breast cancer patients as they fight the awful disease. Also, the outstanding broadcaster grants scholarships to high schoolers as well as sponsors a golf tournament for mental health research in his former Alma Mater’s town of Gainesville, Florida. Cris is a board member of Camp Stepping Stone, a camp for handicapped children.