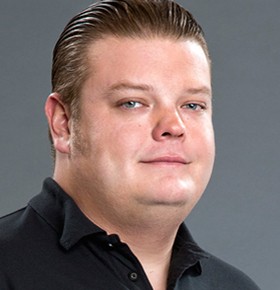 Celebrity Speaker Corey Harrison, also known as Big Hoss, is a reality television personality and businessman. He began working at his grandfathers business, Gold and Silver Pawn Shop at an early age. He eventually became manager of the day-to-day operations and handles everything from hiring and firing employees to managing clients on eBay.

In 2009, the world famous pawn shop made its debut on the History channel with its reality television series Pawn Stars. This hit series is filmed in Las Vegas, Nevada where it chronicles the daily activities that occur within Gold and Silver Pawn Shop. Corey is part of the cast along side his father Rick Harrison, grandfather Richard “Old Man” Harrison and childhood best friend Austin “Chumlee” Russell.

Since the show aired, fans frequently started to visit and become customers. Gold and Silver’s customer base went from seventy to over a thousand customers during a twenty-four hour period.

In 2010, Corey had gastric lap band surgery and altered his lifestyle habits. He became yet another motivating weight loss celebrity. He dropped a staggering two hundred pounds in a little over a year and also improved his diet and exercise in the process. His lifelong friend and cast member Chumlee also lost about a hundred pounds.

Most recently, Corey and Darin Feinstein, part-owner of LA’s Viper Room, made a deal to become co-owners of the Downtown music anchor. They plan to make it a popular part of the Downtown scene in the future.

Since Corey’s rise to fame, he has met many children and adults that are struggling with terminal diseases and post war injuries. He loves being able to meet these people and put a smile on their face.

One day, Corey hopes to take over the family business and become the big boss. Until then, he plans to continue working there and getting his business started with Darin. With his kind acts, willingness to make things happen and successful business skills, there is no doubt why people love Celebrity Speaker Corey Harrison.