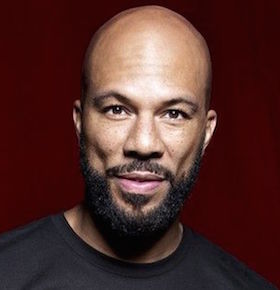 Motivational Keynote Speaker Common is an empowering hip-hop artist, actor and poet. A Chicago native, Lonnie “Common” Lynn Jr. first rose to fame for his musical talents during the 1990’s. He has continued to make music while branching out in his career as an actor appearing in feature films such as Smokin’ Aces, American Gangster and Wanted. In 2015, Common won an NAACP Image Award for Outstanding Supporting Actor in a Motion Picture for his role as civil rights leader James Bevel in Selma. That same year he brought home a Golden Globe Award and an Academy Award for his song “Glory” featured in the film.

Common’s discography includes 10 albums dating from his first album called Can I Borrow A Dollar? in 1992 to Nobody’s Smiling released in 2014. He moved to NYC in 1999 after signing a deal with MCA Records. There he began recording with a group of musicians known as the Soulquarians led by Questlove. His 2000 album Like Water for Chocolate was a breakthrough in his career, earning him his first gold record and creating a new buzz around his music.

During the 2000’s Common linked up with fellow Chicago native Kanye West to collaborate on a number of successful projects. In 2003, Motivational Keynote Speaker Common won his first major awards, bringing home a Grammy and a BET Award for his song Love of My Life (An Ode to Hip-Hop). In total, he has won 3 BET Awards, 4 BET Hip-Hop Awards and 2 Grammy Awards.

Common’s foray into acting has extended beyond feature films to popular TV series. He landed a starring role as Elam Ferguson in the AMC American western TV series Hell on Wheels and has played small roles in shows including VH1’s Single Ladies and The Mindy Project on Fox. Aside from his work as an entertainer, Common is committed to nurturing communities and future generations. He founded and works closely with the Common Ground Foundation which has created programs and initiatives to empower underprivileged youth.