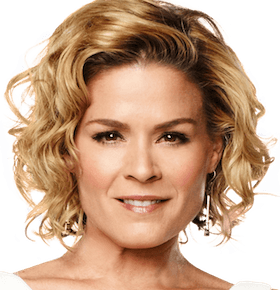 Growing up in a Greek family comprised of restaurant owners, Iron Chef Cat Cora was born to be a celebrity chef. While she majored in Exercise Physiology and Biology, her true passion was cooking, and she didn’t find a job with her degree before she decided to attend the Culinary Institute of America in New York.  Her early cooking career was set directly for television, as her pleasant persona landed her a spot on the show Simplify Your Life and as a co-host on the Food Network’s series Kitchen Accomplished for a short period of time before becoming a celebrity chef speaker.

In 2006, Celebrity Chef speaker Cat Cora landed a spot as contributing executive chef for the popular cooking magazine, Bon Appetit. Chef Cat has also written three cookbooks, including Cat Cora’s Kitchen: Favorite Meals for Family and Friends, Cooking from the Hip: Fast, Easy, Phenomenal Meals, and Cat Cora’s Classics with a Twist: Fresh Takes on Favorite Dishes. All of her cookbooks include countless delicious recipes that are quick and easy to make.

Cat Cora’s appearance on Food Network’s Iron Chef America in 2005 would be the turning point for Chef Cora in her culinary career and as a television personality. She made history by becoming the first ever female Iron Chef. Cora remained the only female Iron Chef for seven years until Alexandra Guarnaschelli defeated celebrity chef Amanda Freitag for the title. Today, Chef Cora and Guarnaschelli continue to be the only two Iron Chefs in America along with fellow Iron Chefs Mario Batali, Bobby Flay, Wolfgang Puck, Masaharu Morimoto, Michael Symon, Jose Garces, Marc Forgione, and Geoffrey Zakarian. Cora was also hired as one of the voices on the video game Iron Chef America: Supreme Cuisine. In early 2012, she was picked up by the Bravo Network as the co-host of the hit series, Around the World in 80 Plates.