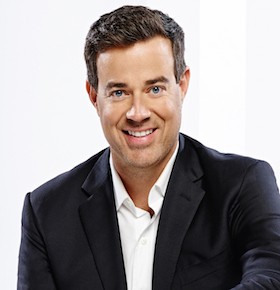 Carson Daly is an American television host and personality currently working several different spots for NBC network including his own TV special New Years Eve with Carson Daly. Carson is best known for his video jockey and hosting spot on MTV’s Total Request Live (TRL) from 1998-2002 before signing on to work with NBC.

Carson was discovered by MTV while working in California as a radio station disc jockey and quickly became a recognizable figure not only on MTV but as a popular television host of the time. He landed hosting gigs at both the Miss Teen USA pageant in 1999 and the Miss USA pageant in 2000. Television Host and Celebrity Speaker Carson was given a lifetime achievement award by MTV in 2004 for his work on-air and behind the scenes while hosting TRL.  After moving to NBC, he began hosting his late night television show Last Call with Carson Daly and his aforementioned New Years Eve special runs which both are still in production today. Carson has produced most of the shows he hosts and developed his own production company as well as being a co-founder of the record label 456 Entertainment. Perhaps his biggest hosting and production task came in 2011 when he was named host of NBC’s popular singing competition show The Voice, and in 2013 he was awarded an Emmy for an Outstanding Reality/Competition Program with the show. Carson also currently works as the on-air Social Media Reporter and Orange Room anchor on the Today show, while filling in as a main anchor on weekends when needed.

Some might not know Carson’s first career goals were to become a professional golfer and he played college golf at Loyola Marymount University. Carson’s mother is a breast cancer survivor and has encouraged him to become a leading activist in breast cancer awareness among his television counterparts.