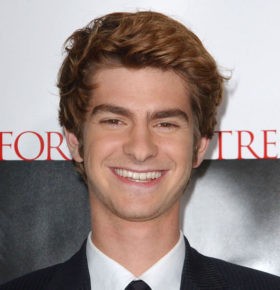 Andrew Garfield is beginning to solidify his reputation as one of Hollywood’s bright young actors of the decade. After performing in several acting gigs in the United Kingdom, Andrew began to garner an international audience and media attention for his stellar role as the co-founder of Facebook Eduardo Saverin in the 2010 depiction of Facebook’s creation titled The Social Network. Andrew and the hit film were nominated for over 10 major film awards including a Golden Globe for Best Supporting Actor and BAFTA Awards for Best Rising Star and Best Supporting Role. Celebrity Speaker Andrew’s highly praised role in the film also played a part in his casting as the next Spider-Man in the latest on-screen adaptations of the Marvel comic superhero. The Amazing Spider-Man, produced by Columbia Pictures, released in 2012 and also starred award-winning actress Emma Stone as Peter Parker’s love interest Gwen Stacy. Andrew again put on the spidey suit to film The Amazing Spider-Man 2, making its box office debut in May of 2014.

Andrew began his acting career on the Channel 4 British TV network with a major role in the teen drama Sugar Rush and again in 2007 as the main character in Boy A which earned him a 2008 BAFTA Award for Best Actor. That same year Andrew was named one of Variety magazine’s 10 Actors to Watch and made his U.S. film debut alongside Meryl Streep, Robert Redford, and Tom Cruise in Lions for Lambs. His performance in the film Never Let Me Go as a young man involved in a love triangle would garner a Saturn Award for Best Supporting Actor alongside Carey Mulligan and Keira Knightley.

In 2011, Andrew became the ambassador of sport for the Worldwide Orphans Foundation and has been involved in a host of charity efforts that include work with the Starlight Children’s Foundation and Stand Up to Cancer.