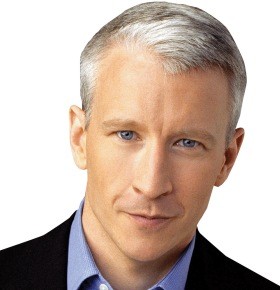 Celebrity Speaker Anderson Cooper is one of the most prominent journalist, author and television personalities in United States news circles today. He currently acts as host to Anderson Cooper 360, his own 1-hour news special broadcast on CNN. Anderson has also been a part of radio broadcasts most recently hosting his syndicated talk show Anderson Live and as a guest correspondent for other CNN broadcasts.

Celebrity Speaker Anderson, a Yale grad, spent a few summers interning with the Central Intelligence Agency before pursuing a career in journalism due to his love and immersion in the news. His first work with any news station came with Channel One news agency in which he studied and lived in Vietnam while filming and reporting on Vietnamese culture as well as other places in war zones such as Rwanda and Somalia. Anderson eventually signed on with ABC network and began anchoring the nightly segment of World News Now and in 2000 took a break from the news when he hosted the reality TV show The Mole.

He returned to the news, this time for CNN in 2001 after September 11th as co-anchor of American Morning alongside Paula Zahn. A year later he was allotted the primetime weekend anchor spot before beginning his own show Anderson Cooper 360. He is well known for his passionate, down-to-Earth coverage of the news and his stint as host of CNN’s New Years Eve Special from Time Square with Kathy Griffith always proves to be quite entertaining. From 2011-2013, Anderson had his own daytime talk show, Anderson Live.

Anderson is a 5-time Emmy Award winning journalist and news reporter and also has two GLAAD Media Awards including the Vito Russo Award given to an openly LGBT media professional who has plays a large role in promoting equality for the LGBT community. Anderson is also on the New York Times Bestseller list for his memoir titled Dispatches from the Edge, detailing his reporting from multiple stories in 2006 including the conflict in Iraq and Hurricane Katrina.