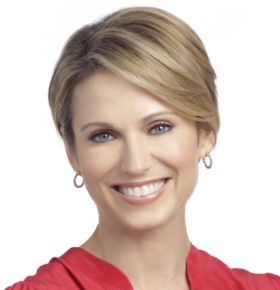 Celebrity Speaker Amy Robach is the newest addition to the ABC morning show, Good Morning America’s (GMA) anchor team. The journalist and Celebrity Speaker is also a breast cancer awareness advocate since her diagnosis in 2013. It was on the national morning show that Robach had an on air mammogram to help bring attention to the importance of early detection during Breast Cancer Awareness Month. The results concluded that she did have breast cancer, leading Amy to believe her decision to take the assignment of an on air mammogram saved her life, or was “the difference between life and death” as she puts it. October 30, 2014 was her one year anniversary on when she discovered she had breast cancer and Amy decided to look at it in a positive life by viewing that day as the day she started surviving.