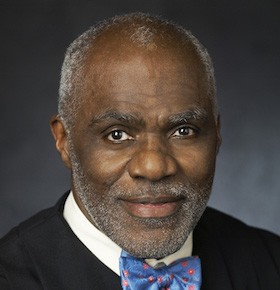 Alan Page is an associate justice of the Minnesota Supreme Court, a motivational speaker, and a former star NFL defensive tackle. While in the NFL, Page earned first-team All-Pro honors six times, and he was named second-team All-Pro three times. In addition, he is a four-time NFC Champion and holds one NFL MVP award. Page was named to the prestigious 1970 NFL All-Decade team, and he has also been named one of the top 100 NFL players of all-time by NFL Network.

Playing for Notre Dame in college, Page led the Fighting Irish to a national championship as an All-American defensive tackle. After college, Page was drafted by the Minnesota Vikings, with which he won four conference titles and one league championship. During his career with the Vikings, Page recorded 148.5 sacks, recovered 22 fumbles, and scored three touchdowns. He also recorded three safeties, which ties him for second most safeties in NFL history. In 1971, Page won the NFL MVP, and he is currently one of only two defensive players to win this award. At the end of his career, Page had amassed an incredible 173 sacks, 23 fumble recoveries, 3 safeties, and 28 blocked kicks.

Page became a lawyer after retiring from the NFL; he had earned his Juris Doctor in 1978 while playing for the Vikings. From 1979 to 1984, Page worked for the law firm Lindquist and Vennum. In 1985, Page was appointed Special Assistant Attorney General, and he was later promoted to Assistant Attorney General. In 1992, Page was elected as an Associate Justice of the Minnesota Supreme Court, becoming the first African-American to ever serve on that court. Page was reelected in 1998 and received the most votes in any election in Minnesota history. He was later reelected in 2004 and 2010 before reaching the mandatory retirement age for judges. Page has won an abundance of significant awards, including the National Football Foundation Distinguished American Award, the Theodore Roosevelt Award, and a Silver Anniversary award. He has also received nine honorary doctorates. In 1988, Page launched the Page Education Foundation, which provides financial and mentoring assistance to students of color in exchange for those students’ commitment to volunteer service in the community.