Marcus Lemonis Unstoppable on ‘The Profit’ 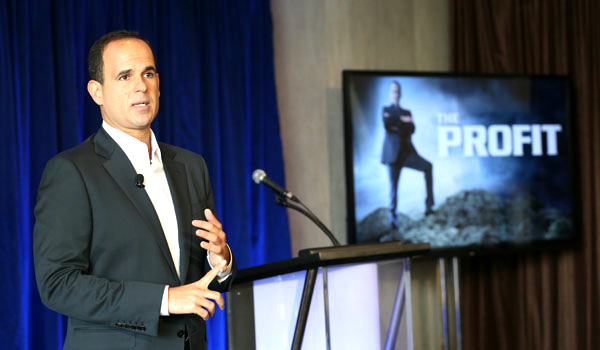 When you watch CNBC’s reality TV series The Profit starring entrepreneur Marcus Lemonis, you can’t help but notice resemblances of Dallas Mavericks owner and Shark Tank TV series regular Mark Cuban in this savvy CEO of Camping World and Good Sam Enterprises. While Marcus may not be one of the “sharks” on the TV series Shark Tank, he is certainly a shark in a fish tank on his own series, taking a full-bite out of America’s business world by lending his money and expertise to failing businesses around the United States.

CNBC has spent the last few years branching out from normal business talk shows like Suze Orman’s into the world of reality TV with shows like Money Talks, Shark Tank, and The Profit. Marcus’ TV series allows any business of any type in the U.S. to contact him for his help, he then decides whether or not it would be a good business move to step in. Similar to the premise of Jon Taffer’s Spike TV series, Bar Rescue, mixed with some Shark Tank-esque qualities, Marcus appears as the Lone Ranger, doing it on his own without competing bids or offers, and working with existing businesses not startup companies. The show aired its first season last summer to mixed reviews but this season has caught fire as it seems the entrepreneurial spirit is as alive as it has ever been for young college graduates and established professionals looking to finally pave their own way.

Many entrepreneurs like Biz Stone (co-creator of Twitter) and Sara Blakely (creator of Spanx) have created something new to become successful but Marcus is in the market of bettering existing establishments that can prove their worth to the local and national economy. Marcus doesn’t limit himself to one particular industry/market, or to one particular business strategy. He gains an ownership stake in each company he works with in exchange for his financial backing and entrepreneurial expertise. His ability to key on the right target audience for each specific business and cut losses has helped revive everything from restaurants to workout centers to car dealerships.

Now the kicker is he’s making a TV show out of it which not only reinforces his credibility but also invites more customers to be a part of his entrepreneurial empire. It’s a win-win for those participating as well; their businesses get the help they need from a professional and the national exposure that almost certainly secures better sales numbers than they’ve ever achieved. It remains to be seen what other opportunities will come of this for The Profit’s big star. People of all ages are tuning into this guy’s stuff and don’t be surprised when he starts popping up as one of the guest speakers at various university events and business conferences or trade shows for business professionals. He has yet to go in the way of other entrepreneur/reality TV stars like Bethenny Frankel who coined their own personal brand and products, but plenty of people would buy a Marcus Lemonis how-to guide or video series. Let the Lemonis craze officially begin.