The realm of culinary expertise definitely has its perks. While the most glaring benefit is the indulgence in and creation of some of the world’s finest cuisine, many celebrity chefs also get the opportunity to become TV personalities, show hosts, and provide live cooking demonstrations to their mouth-watering fans. A dream of many chefs and also an incredible personal branding opportunity comes in the form of owning their own signature restaurant. In the coming months, several of the industry’s top chefs will be opening new ventures housed in a variety of places across the States. 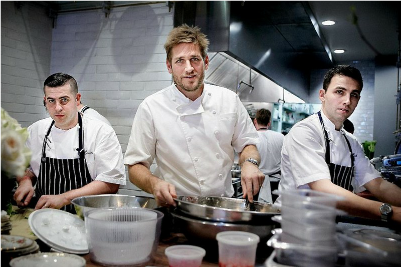 Heralded as one of the Dons of the culinary kingdom alongside the likes of Emeril Lagasse and Wolfgang Puck, Bobby Flay is planning to further expand his reach with a new Spanish/Mediterranean bistro in New York City called Gato that opens next month. After the unforgiving NYC real estate market forced Flay to close his centerpiece restaurant Mesa Grill’s NYC location last summer, he is determined to remind his fans and New York City taste buds of his culinary prowess. Sultry celebrity chef Giada De Laurentiis recently made her modeling debut at New York fashion week and is set to reach another first milestone in her career when she opens her Italian eatery Giada in the comforts of the Cromwell Hotel in Las Vegas. The Food Network star aims to combine great food and fun entertainment when the restaurant opens in May. Another celebrity chef taking a stab at their first restaurant venture is the beloved Aussie and Top Chef Masters host Curtis Stone who recently opened his restaurant Maude in Beverly Hills. The eatery is named after his grandma from whom he inherited a portion of his love for cooking and will feature a nine-course prix fixe menu that highlights a different ingredient each month.

The Chew host Carla Hall is looking to add a little different ingredient to bland airport dining when she opens Page, a southern-style restaurant in Washington, D.C.’s Reagan National Airport. The restaurant will bring the fresh flavors of local produce, hearty entrees like crab cakes and pot pies, and a raw bar to the airport table. The industry’s leading bad girl Paula Deen is looking to erase the bad taste she left in the public’s mouths after racial comments threatened to erase the branding empire she built for herself. Paula Deen made a recent appearance at the South Beach Food & Wine Festival and the Queen of southern cooking has plans in the works to open Paula Deen’s Family Kitchen in the Tennessee mountain vacation spot Pigeon Forge. The restaurant will feature a retail store much like the combined dining and shopping experience created by Cracker Barrel. Entertainment superwoman Martha Stewart was also present at the recent food & wine fest. The popular cookbook author and TV personality joined Geoffrey Zakarian on his radio show broadcast to express her interests in opening a restaurant in the NYC office building that houses her entertainment empire Martha Stewart Living Omnimedia, but there has been no official word on whether this will actually come to fruition.

Interested in hiring a celebrity chef speaker for your next event? Contact Celebrity Speakers Bureau today through our contact form, by calling 888.864.4734 or email us booking@celebrityspeakersbureau.com for more information.