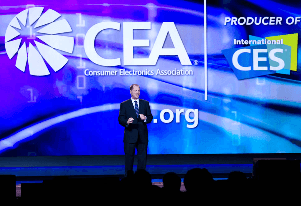 The Consumer Electronics Show (CES) has been the launching pad for many innovative technologies since it first began hosting the annual event in 1967. From the VCR to High Definition Television and other software innovations, many new electronics and technologies have been previewed at the event before being available to the public. This year’s show will run from January 7th to January 10th in Las Vegas, Nevada. The show is expected to attract over 3,200 exhibitors in 15 different categories of technological and electronic products.

Last year’s CES featured multiple celebrity business speakers from different categories in the electronic and technology world including an opening keynote address from Qualcomm’s CEO, Dr. Paul Jacobs. This marked the first year in many that a representative from Microsoft did not deliver the opening keynote for the show; although Microsoft CEO Steve Ballmer eventually did make a guest appearance to introduce Windows 8 and Windows 8 mobile. Following Ballmer was Verizon Chairman and CEO, Lowell McAdam. With the rise of smartphones virtually taking over the technological world, McAdam discussed the future and impact of smartphone technology. Other notable celebrity speakers included Eric Shmidt of Google, Tim Baxter of Samsung, Robert Kyncl of YouTube and Ryan Seacrest of American Idol (no, we are not kidding).

2014 will kick off with Intel’s new chief executive Brian Krzanich. Krzanich is expected to share Intel’s newest direction and vision where every device and object connects and computes, and how the newly developed technology which uses less power is still able to maintain high functionality.

Up next will be Audi’s Chairman Rupert Stadler focusing on the future of innovation in the automotive industry and how it relates to the consumer technology market. Research conducted by The Consumer Electronics Association (CEA) has found that consumers are increasingly intrigued by electronic features for enhanced safety and information in their cars, and it is starting to become a major selling point for many automotive companies including industry leader Audi. A separate series at the show, the Technology Innovators keynote series, will feature big thinkers who are spearheading and reshaping the way that technology impacts our world. Most recently Sony’s President and CEO Kazuo Hirai has been added to the powerhouse keynote line-up. Who will be next?

Interested in hiring a business speaker for your next event? Contact Celebrity Speakers Bureau today through our contact form, by calling 888.864.4734 or email us booking@celebrityspeakersbureau.com for more information.