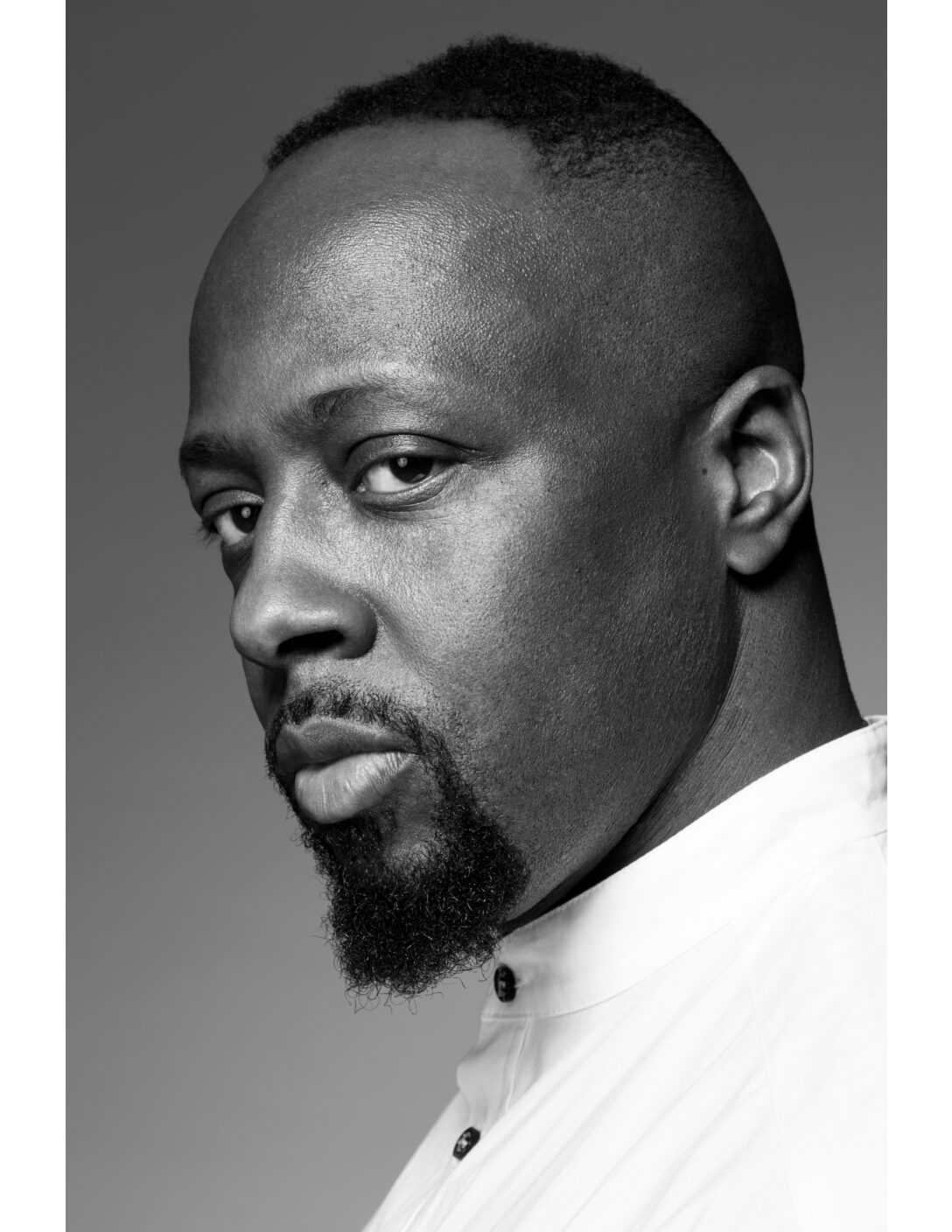 The music that Wyclef Jean has written, performed, and produced — both as a solo superstar and as founder and guiding member of the Fugees — has been a consistently powerful, pop cultural force for over two decades. In 1996, the Fugees released their monumental album The Score, which inspired notoriously prickly rock critic Robert Christgau to write: “so beautiful and funny, its courage could make you weep.” The album, created in Wyclef’s studio in his uncle’s basement in New Jersey, hit No. 1 on the Billboard chart, spawned a trio of smash singles (including their indelible reinvention of Roberta Flack’s 1973 ballad “Killing Me Softly”), and is now certified six times platinum. But Wyclef, a child prodigy with a wealth of musical influences from jazz to classic rock to reggae, resisted the pressure to duplicate the sound and style of that masterwork. Instead, he launched himself as a producer and solo artist whose work drew from an innovative and eclectic palette that included elements of pop, country, folk, disco, Latin, and electronic music.

“I just keep moving,” he says today. “If I didn’t keep moving after The Score, y’all wouldn’t have had the biggest pop song of all time.” Wyclef is referring to Shakira’s chart-topping single “Hips Don’t Lie,” which he co-wrote, produced and is featured on. That 2006 blockbuster climbed to No. 1 in 20 countries including the U.S. — a crowning achievement atop a nearly unprecedented run of hits that include Wyclef’s own “Gone Till November,” “Ghetto Superstar” (Pras feat. Wyclef Jean), Carlos Santana’s No. 1 single “Maria, Maria” (featuring Jean and Product G&B) and the late Whitney Houston’s “My Love is Your Love.” “The only record that captures Whitney, her daughter [Bobbi Kristina], and Bobby Brown all on one song,” Wyclef says of it.

Wyclef has been rewarded for his creativity and adventurousness with three Grammy Awards, a Golden Globe nomination and an Emmy nomination, a spot on the cover of Rolling Stone’s special “Top 50 Hip Hop Players,” and the opportunity to make music with such legends as Michael Jackson, Queen, Mick Jagger, Paul Simon, Earth, Wind & Fire, Kenny Rogers, and Tom Jones. As a solo artist, he has released six albums that have sold nearly nine million copies worldwide, including his 1997 debut The Carnival and 2000’s aptly titled The Eclectic: 2 Sides II a Book, which even turned wrestling superstar/action hero The Rock into a pop star with the international hit single “It Doesn’t Matter.” Through it all, Wyclef kept an ear cocked for new talent. He helped launch Beyoncé ́s career with Destiny’s Child’s early hit “No, No, No.”

Wyclef has not abandoned his dedication to sonic excursions. His 2017 album, The Carnival III: Fall and Rise of a Refugee, features contributions from Emeli Sandé, Supah Mario, The Knocks, and Lunch Money Lewis.

When an era-defining superstar takes time between albums for eight years, people often wonder if the artist has perhaps retired, but Wyclef has never stopped making music. “Every day when I wake up, I go into the studio and record,” he says. “There’s always a guitar and a piano nearby. I’m always writing, that’s my survival. I don’t go to a therapist. My therapy is when I pick up my guitar and sing.”

One of the many products of Wyclef’s unfaltering passion for his craft was his collaboration with Carlos Santana, “Dar Um Jeito (We Will Find a Way),” the official anthem of the 2014 World

Cup. The track also featured Swedish superstar DJ and producer Avicii and Brazilian singer-songwriter Alexandre Pires. Just a few months after “Dar Um Jeito” was released, Wyclef teamed up with Avicii again to create “Divine Sorrow,” an electro-acoustic ballad that instantly blew up on YouTube when the lyric video was posted, racking up four million views.

In 2016, Wyclef was back yet again with another hit, “Hendrix,” the first single off of his EP, J’Ouvert. “Hendrix” garnered over 20 million streams worldwide, and also received warm reception from numerous music critics, including Edwin Ortiz, news editor of Complex who said: “Wyclef takes this inspiration and turns it into a heat rock of a performance. He also showcases a double-time flow that proves he hasn’t lost a step from a lyrical standpoint.”

Wyclef hasn’t only been making music for the new generation; his work has influenced the new generation, too. One does not have to look much further than the name of the first track on Young Thug’s latest mixtape, JEFFERY, “Wyclef Jean,” to realize the impact Wyclef has had on hip hop and its next generation of musicians (each song on JEFFREY was named after one of Thugger’s idols). Wyclef and Young Thug also collaborated on the ninth track on the mixtape, “Kanye West.” The creative connection was so strong between Young Thug and Wyclef that the two musicians teamed up again to record the Caribbean-inspired “I Swear,” the third single off of J’Ouvert.

Each of these unique tracks and moments are significant reminders that Wyclef Jean can still astound and impact people with his music.

One couldn’t blame Wyclef for wanting to take time away from the spotlight given the whirlwind of press, good and bad, he received after announcing that he was going to run for president of Haiti in 2010, the summer after a massive earthquake killed over 200,000 people. “It felt like something I needed to do at the time,” he says. Wyclef flew home to help and saw the devastation firsthand. “Haiti was in dire need and I wasn’t going to go down in history as just another musician who did nothing and just hid behind the songs,” he says. Born in Croix-des-Bouquets before moving to New Jersey at age nine, Wyclef has always kept very close ties to the Haitian people and continues to provide aid and consultation, and humanitarian work in his native country. His love for his native country was reciprocated by many and questioned by others. “I stepped into the fire,” he says. “People took shots at me, of course. But it’s better to be right than popular. And history will always reveal the truth. You can’t live for the fakeness or you will just be erased from time.” However, the fury and the frenzy of the election left him depleted. “When I got back to New York I was out of my mind,” he says. “I had just had a really tense experience. I thought I could change policy and legislation there, but coming back to America — yo, it hit me. I was like, ‘Man, what am I gonna do?’ I was at the height of my musical career. Nobody could stop me. I was moving like a bullet as a producer.”

As big a comeback as “Divine Sorrow,” “Hendrix” and “I Swear” have proven to be, one should not count on Fall and Rise of a Refugee as being an entire album full of mid-tempo tracks. “Do I have anything for the clubs?” he asks. You’re talking to The Carnival Man! I’ve done the biggest dance records of all time! I plan to put them on the dance floor more so than ever. I know people want that dance floor bounce from me — that hip hop thing.”

Which leaves only one question. How long can Wyclef keep it up now that he’s back at his old velocity? “The forties are the new 20’s of hip hop,” he says with a laugh. And while he hints that the Fugees crew are all on good terms, and he doesn’t rule out a future reunion with Lauryn Hill and Pras, right now, Wyclef is trying to reckon with his past and write a new chapter. “The music I’m making, it’s sounding like the ‘90s meets 2017,” he says. “It’s very authentic and all about the vocality, making people feel and reminisce off of that sound they love but combining it with new sonics.”

Jean’s 2017 studio album, Carnival III: The Fall and Rise of a Refugee, his first in eight years, was released in September 2017. The album was named one of the “25 Most Anticipated Albums” of the fall by Billboard Magazine that year. In November 2017, Jean also released a mixtape, entitled, “Inspired By…” that paid tribute to the music that inspired him that year. The project received high acclaim from critics and fans alike. In December 2017, Jean wrote and performed a song, “Dimelo,” along with X-Factor winners, Rak-Su. The song rose to the top of the charts in less than a week in the UK. In March 2019 Wyclef released Wyclef Goes Back to School, a collaboration with students he met while touring the United States and visiting colleges across the country, and features singles “Demons Enjoy,” “Baba” and “Faded Butterfly”, while his latest song “Dear Future Self (Hands Up)”, with Fall Out Boy, premiered on Jimmy Kimmel Live! in September 2019. In December 2019, Wyclef announced the launch of his music publishing and distribution company Carnival World Music Group, with the support of entertainment industry finance firm Sound Royalties.

In the last year alone Jean has been busy recording, producing, hosting, and composing for some of the biggest names in production. Last year Netflix announced the production of an untitled animated project based on the real-life story of Wyclef’s childhood in Haiti, which will be co-produced by Greg Silverman’s company Stampede and have Jean as the film’s composer. 2020 also found Wyclef venturing into the podcast industry as the host of RunThatBack, a one of a kind weekly show for music lovers of any type, where Wyclef interviews heavy hitters from all walks of life, from music, to sports, politics, and beyond. Guests on RunThatBack include Clive Davis, Steve Harvey, Carlos Santana, Kirk Franklin, and more. He also teamed up with Google in the fall of 2020 to create a jingle for their #BlackOwnedFriday campaign to promote and support shopping black-owned businesses for Black Friday during the holiday season. This campaign won a Webby Award, and has been nominated for a Clio Award, among others. In his most recent project, Wyclef has stepped in as composer for season four of Showtime’s The Chi, a show created by screenwriter and actress Lena Waithe.

Currently Wyclef serves as the President of the Entertainment Lions for Music jury for the prestigious Cannes Lions Awards for both the 2020 and 2021 award years.