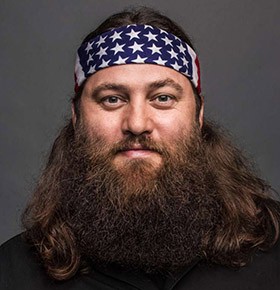 Reality TV Star, Entrepreneur and Christian Speaker Willie Robertson is a hunter, outdoorsman, author, and businessman who serves as the CEO of his family-operated business Duck Commander and Buck Commander.

The show Duck Dynasty premiered in 2012 featuring the Louisiana bayou family as they go about their daily lives operating their hugely successful company, Duck Commander, which manufactures state-of-the-art products for duck hunters, mainly duck calls and decoys. The business was started by Willie’s father, Phil Robertson, who worked out of his family shed for twenty five years. When Willie graduated from the University of Louisiana Monroe with a degree in business, he was named CEO and used everything he learned to turn their homegrown mom-and-pop family business into a multi-million dollar brand. In 2012 the company brought in over $40 million of revenue. Duck Commander is run by Willie, Phil, Jase, and Kay Robertson with fifteen employees who all live in the Robertson’s neighborhood.

The family has had huge success on screen as well. Duck Dynasty continues to break cable television and A&E network ratings records; the fourth season premiere episode was watched by a record 11.8 million viewers, making it the most-watched nonfiction cable telecast in history. In 2016, Duck Dynasty Junior will air, showcasing all the Robertson children and cousins.