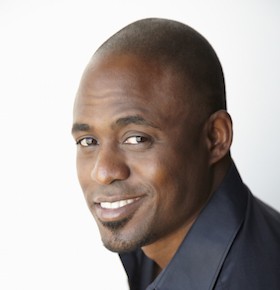 Celebrity speaker Wayne Brady is one of the most diverse entertaining talents in show business today.  There aren’t many people who can match Wayne’s combination of talent in comedy, singing and acting.  Over the past couple of decades, Wayne Brady has become a major figure on American television screens as both a host and actor.  Wayne is widely recognized for his clean reputation as a genuine personality.

Celebrity Speaker Wayne first caught the eyes of the American audience from his role on the well-known improvisational comedy show Whose Line Is It Anyway?  The show was one of the most popular comedy series on television, and Wayne was an integral part of its success.  He became known for his ability to burst into song during the comedy sketches and captivate both the live and television audiences.  For his performance in Whose Line Is It Anyway? Wayne was awarded a Primetime Emmy Award for Outstanding Performance in a Variety, Music or Comedy show in 2003.  Wayne used his success to establish his own talk show, The Wayne Brady Show.  The Wayne Brady Show only lasted 3 seasons but was awarded 4 Daytime Emmy Awards.  After garnering a reputation as a reliable television host, Brady has since been used in the role for multiple programs.  He hosted the short-lived series Don’t Forget the Lyrics for 3 seasons, and currently is the host of the day-time game show Lets Make A Deal.  Wayne has been a guest judge on Dancing With the Stars and a guest host on The Late Late Show. Wayne is also an accomplished musical artist and received a Grammy Nomination for his song “A Change is Gonna Come.”

Wayne Brady also is a major player in the philanthropy community.  He is very active in the movement against bullying in kids, and has acknowledged to being a victim of bullying as a child.  He’s also one of the primary spokespeople for Ronald McDonald House Charities, and serves on their celebrity board.