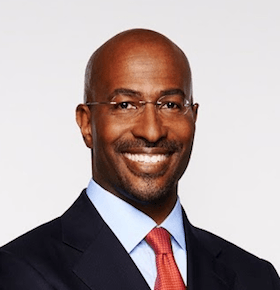 Van Jones is most recognized as an advocate for the environment and civil rights. He is also a highly sought after celebrity speaker, a New York Times Bestselling author, and cohost of CNN’s television program, Crossfire.

Van Jones released his first book, The Green Collar Economy: How One Solution Can Fix Our Two Biggest Problems, in fall of 2008. In the book, Jones provides a framework for a plan that will solve socioeconomic inequality and environmental problems. It went on to become a New York Times bestseller and is the first environmental book written by an African-American to make the list.

In 2009, Jones was appointed by President Barack Obama to a position in the White House Council on Environmental Quality entitled Special Advisor for Green Jobs, Enterprise and Innovation. Two years later, Van Jones co-founded the political organization, Rebuild the Dream, whose goal is to counter the Tea Party movement.

Throughout his career, Van Jones has received many awards including the Hubert H. Humphrey Civil Rights Award, the NAACP President’s Award, Elle Magazine’s Green Award, and countless others. He was also named one of Time magazine’s top 100 Most Influential People in 2009 and one of Rolling Stone Magazine’s 12 Leaders Who Get Things Done in 2012.

In 2013 Van Jones was asked to join CNN’s current events debate show, Crossfire, as a panelist representing the left alongside political consultant Stephanie Cutter. Also on the panel for the right are political commentator S. E. Cupp and Former House Speaker Newt Gingrich. Jones has also appeared on several other programs including The O’Reilly Factor, The Colbert Report, Larry King Live, Real Time with Bill Maher, Erin Burnett OutFront, Piers Morgan Tonight, The Charlie Rose Show, and The Arsenio Hall Show. He has also been featured in The Washington Post, The New York Times, New York Daily News, The Huffington Post, and countless other publications.