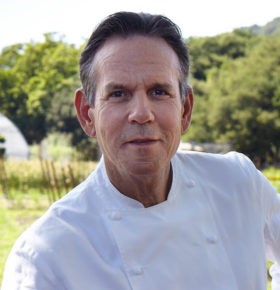 Celebrity chef speaker Thomas Keller, a native of Oceanside, California is a restaurateur, cookbook author, and Celebrity Chef. It would be a move across the country with four brothers to Florida where he obtained a job as a dishwasher at the Palm Beach Yacht Club that would kick off his cooking career. During the summers of his college years, Chef Thomas worked under the instruction of Rolan Henin, a Master Chef who helped him learn the ropes of French cooking. He would later move to New York, followed by Paris, where he continued to hone his French cooking skills at various restaurants. Chef Keller moved back to New York, where he opened his first restaurant, Rakel. Sadly, the restaurant fell victim to tough economical times. This would be a blessing in disguise, as he opened his legendary restaurant, The French Laundry, which earned rave reviews. The French Laundry has won more awards than most restaurants are even nominated for, some such accolades include Best Restaurant in the World and Best Restaurant in the Americas by Restaurant Magazine, multiple James Beard Awards for Best New Restaurant, Outstanding Service, Outstanding Chef: America, and Outstanding Wine Service, was voted number 1 for Top Food by Zagat, and was named Top Restaurant for Food by Wine Spectator Magazine. Chef Thomas Keller has received countless awards as well, including Chef Of the Year by Bon Appetit Magazine, America’s Best Chef by TIME Magazine, and a Culinary Hall of Fame Induction.

Chef Keller wrote The French Laundry Cookbook, based off his experiences with the restaurant, which also won a ‘laundry’ list of awards. His following publications continued to turn heads, including the heads of those in the film industry. Keller has worked on the movie Spanglish where he taught Adam Sandler to cook the world’s “greatest sandwich”. Chef Thomas was also a consultant for the famous Pixar cooking film, Ratatouille.