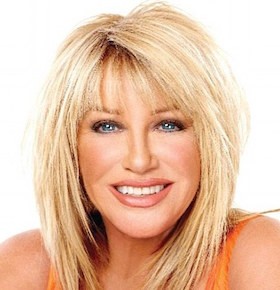 Before the influx of reality TV, sitcoms ruled the daily broadcast. As a featured cast member of the award-winning ABC sitcom Three’s Company, Health Speaker Suzanne Somers will forever be immortalized in TV lore as the beloved secretary Chrissy Snow. Over the years Suzanne has used her naturally ability to entertain and her poise on camera to become an impressive and accomplished keynote speaker, celebrity spokesperson and businesswoman. She was diagnosed with breast cancer in 2001 and had a lumpectomy to remove the cancer. She is now an active healthcare advocate for alternate cancer treatment methods. In 2015, Suzanne made her glorious return to TV this time to show off her dance moves as a contestant on season 20 of ABC’s Dancing With The Stars!

Suzanne landed the role of Chrissy Snow in 1977. She starred on the show for 5 seasons. After leaving Three’s Company, her next role on TV came as Hildy Granger in the American sitcom She’s The Sheriff. Health Speaker Suzanne is also recognized as an infomercial giant. She was chosen as a celebrity spokesperson for the Thighmaster exerciser and featured in many infomercials for the company throughout the 1980’s. In 1991, Suzanne landed a role on the family sitcom Step by Step alongside Patrick Duffy. This show was a popular ABC Friday night comedy that ran for almost 8 years. From 1997-1999, Suzanne cohosted Candid Camera alongside Peter Funt, a long time actor and writer for the New York Times. In 2012, Suzanne hosted finally got the chance to host her own show, The Suzanne Show, on Lifetime Network discussing various topics in fitness and health.

Throughout her career, Health Speaker Suzanne has also expressed her creativity as an author. Suzanne has written numerous books on health and beauty as well as her opinions on alternate cancer treatment methods.

Some of her work includes Ageless: The Naked Truth About Bioidentical Hormones (2007), Breakthrough: Eight Steps to Wellness (2009), and I’m Too Young for This: The Natural Hormone Solution to Enjoy Perimenopause (2014). Since her time as an actress she has also branched out in the business world to create her own signature line of organic cosmetics and health supplements.