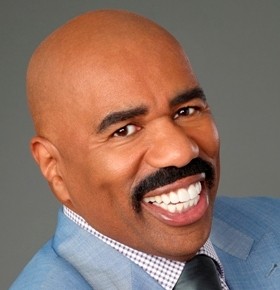 Religious Keynote Speaker Steve Harvey has ruled the entertainment industry from the stage of his own talk show to the pages of his New York Times bestselling books. This clever comedian has worked his way to the top and it’s clear that’s where he belongs! Steve is most known for his own show, The Steve Harvey Show, as well as host of week night game show, Family Feud. His advice on dating, relationships, and living a faith-centered life have made him a popular keynote speaker at corporate events and fundraisers. Steve has won 2 daytime Emmy Awards for his TV work and is a leader in the African American community having won 13 NAACP Image Awards throughout his career.

Most people are unaware of just how hard Religious Keynote Speaker Steve Harvey had to work to get to where he is today.

He pursued a career in stand-up comedy while living out of his car and hotels in show cities. For many years he struggled living gig to gig until he tried out for the Johnnie Walker National Comedy Search. Steve was a finalist in the search and from there landed a job hosting the reality TV show, It’s Showtime at the Apollo in 1990. After several years, Steve moved on to star in ABC’s Me and the Boys in 1994. Just two years later, the WB Network picked up The Steve Harvey Show, which ran for six years until 2002. He published his first guide book in 2009 and has since released a total of 6 books sharing life advice for men and women alike.

During Steve’s first several years on television, he continued to work on his one true love: comedy. Steve toured with The Kings of Comedy along with celebrity talents such as Cedric the Entertainer and the late Bernie Mac. The comedy act was later turned into a popular DVD series. Steve also dabbled in music. He released 3 albums consisting of gospel, hip-hop and R&B tracks. In 2010, he became the familiar host of Family Feud. Steve is a creator and an entrepreneur at heart. He has launched a clothing line with Upscale Men’s Ware and Belk. He also hosted his own weekday radio show, The Steve Harvey Morning Show. In 2014, Religious Keynote Speaker Steve Harvey launched his own dating network called Delightful, aimed at helping women become more dateable.