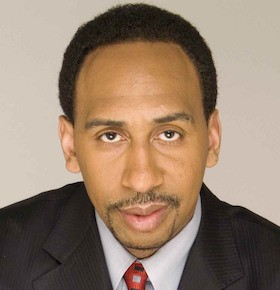 Sports Speaker Stephen A. Smith, more commonly known as Stephen A., is a basketball personality of his own nature. With his high toned, thought-provoking talent, Stephen A. has forced sports analysts to step their game up. He knows how to get people going and thinking about what is going on in the sports industry today. Stephen A. is known world-wide for his work with ESPN.

Sports Speaker Stephen A. Smith grew up in New York with his 5 siblings and parents who were immigrants from the Virgin Islands. After graduating high school Stephen A. attended the Fashion Institute of Technology for two years and then transferred to Winston Salem State University located in Winston-Salem North Carolina. After playing basketball on campus for two years Stephen A. then transferred to Johnson and Wales University in Charlotte. Fresh out of college with writing experience Stephen A. was looking for a place to make a good impression. Beginning in 1994, Stephen A. found a position writing for the Philadelphia Inquirer before he began writing for the Philadelphia 76ers as their NBA columnist.

In 2005, Stephen A. started working on the radio, but a few years later he wanted to try television so Scott Van Pelt took over his hour long radio session which gave Stephen A. the opportunity to sign with ESPN. Steven A. is currently a talk show host on ESPN’s First Take with long-time friend and partner Skip Bayless. Together, along with host and moderator Cari Champion, Stephen A. and Skip work a two hour long show dedicated to discussing all things sports. They have brought in guests on what they call, “Who we got Wednesdays” such as Kevin Hart, and Ryan Clark. Stephen A. can also be found on channels other then ESPN through Oberto all-natural beef jerky commercials where he acts  as “The Little Voice in Your Stomach,” for multiple star athletes such as Richard Sherman, Louie Vito, and others.

Stephen A. has had a reputation for speaking his mind when something he feels strongly about falls into his lap. Some have criticized him for this while others feel it gives the discussion a jump most analysts cannot. He gets people talking which is why First Take is such a big success. Celebrities from T.I to Regis Philbin to Pete Rock have all said First Take is a big part of their day.