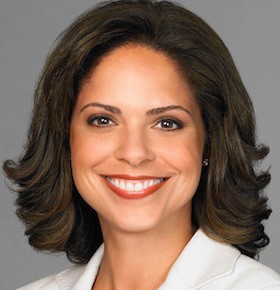 Celebrity speaker for hire Soldedad O’Brien is one of the most trusted names in broadcasting and journalism.  Soledad has become a known catalyst for social change across cultural, political and industrial sectors.  Throughout her career she has worked with some of the world’s largest broadcast syndications in a variety of prominent roles.  O’Brien has an elite education, graduating from Harvard University with degrees in production and journalism.

In addition to her work in journalism, O’Brien is an accomplished speaker. In 2018 she delivered a keynote at NAB Show New York with Gordon Smith, CEO and President of NAB and former US senator. Their conversation covered politics and media involvement. NAB is a conference that engages business leaders in new media trends and innovations. The 2018 conference hit a record breaking 15,097 attendees with a lineup that also included Wendy Williams and Robert De Niro. Soledad made headlines in 2018, speaking with online publication, The Root, and calling out media reprisentatives for perpetuating racism. She has also made commencement speeches at a number of universities including Cornell University, Binghamton University, and Spelman College.

Soledad O’Brien is currently Chairman and Founder for Starfish Media Group which is a 360-media production company. Starfish Media works with several big name companies including Cover Girl and has produced several documentaries. These include Black and Blue, a film aired on CNN centering on the Black Lives Matter movement. In addition to this, Soledad produced Heroin USA, a documentary about skyrocketing statistics on heroin use in the United States, which aired on Aljazeera America.

Soledad is now anchor of Matter of Fact with Soledad O’Brien. It is a weekly political show owned by Hearst Television and distributed by Sony Pictures. Celebrity Speaker Soledad began her national broadcasting and reporting career with NBC News. Following her success at NBC, Soledad began her career with CNN.  Initially she was a co-anchor on CNN’s daily morning program American Morning.  She ceased her role on American Morning in 2007 and focused primarily on correspondence and reporting for the network.  She returned to the studio in 2011 to host the new CNN morning show Starting Point.  Her stay at the position lasted two years before Soledad announced that she was leaving CNN as an anchor.  In another twist to her career O’Brien accepted a position with HBO in June 2013 to co-host Real Sports alongside Brian Gumbel.

Obrien’s charity work is extremely well documented including her and Brad Raymond’s PowHERful Foundation. It is an organization helping young women get to and through college. They provide girls with mentorships, scholarships, and other financial assistance. Since it’s founding in 2011, the foundation has carried 27 women through their college educations.