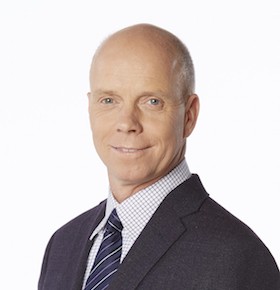 Sports Keynote Speaker Scott Hamilton is a former American figure skater who took home the Olympic Gold Medal in the Men’s singles event at the 1984 Winter Olympic Games in Sarajevo, Yugoslavia. This came after 4 straight U.S. and World Championship titles from 1981-1984. Scott has since become one of the most animated and exciting sports commentators on-air, reporting and commentating on figure skating events for major networks including CBS and NBC. In 2015, Scott was a featured keynote speaker at the 4th annual Doha Goals Forum discussing the power of sports to affect positive social change around the world.

Sports Keynote Speaker Scott Hamilton’s rise to fame came after a breakthrough win at the 1981 U.S. Championships. After the big win, Scott went on to win every competition he competed in for the next 4 years. He went pro in 1984 and toured the country with Ice Capades for two years before he founded Scott Hamilton’s American Tour (later renamed Stars on Ice). He co-produced and performed in Stars on Ice for 15 years. Scott was inducted into the U.S. Olympic Hall of Fame in 1990.

After his skating career ended, Scott’s natural charisma helped him easily transition into the sports broadcasting world as a skating commentator for CBS and NBC. In 1997, he was diagnosed with testicular cancer and subsequently had to undergo treatment. His battle with cancer is just another part of his amazing life story that he uses to inspire others to face their own unique life challenges.

In 2006, Sports Keynote Speaker Scott Hamilton became the host of the Fox celebrity reality show Skating with Celebrities. He has also written two best selling books, The Great Eight and an autobiography titled Landing It. Scott dedicates his time to many philanthropic groups. He serves on the Board of Directors for Special Olympics International and is a Global Ambassador for the Special Olympics. Scott also raises money and awareness for St. Jude’s Children’s Hospital, Multiple Myeloma Research Foundation, Make-A-Wish and his own foundation, the Scott Hamilton Cancer Alliance for Research, Education and Survivorship.