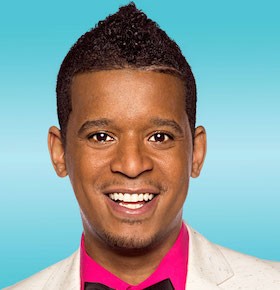 If you haven’t heard the name Chef Roble Ali, you soon will. The celebrity chef speaker is said to be one of the hottest up-and-coming chefs in New York City and, with his own television series on Bravo, the rumors seem to be true. The show, called Chef Roble Ali & Co. stars Chef Roble and his sister, Jasmine as they try to start their catering company in New York City for high-end clients including some of today’s most notable individuals including President Obama, Leonardo DiCaprio, John Legend, Jack Nicholson, Michael Jackson and Vanessa Williams, to name a few. He has also appeared on television programs such as Watch What Happens: Live, The Wendy Williams Show, and ABC’s daytime show, The Chew, alongside hosts and celebrity chefs Mario Batali, Daphne Oz, Carla Hall, and Michael Symon.

Prior to his television debut, Chef Ali was a student at the Culinary Institute of America in Hyde Park, New York. From there, Roble remained in New York City, working for such companies as Abigail Kirsch, a catering company where he made history as the youngest ever sous chef to work there. He also worked at Restaurant Mojo as Chef de cuisine under celebrity Chef Chris Santos and as Executive Chef at a popular gastro-lounge in New York City called Avenue, where he worked for Noah Tepperberg, a huge name in the club scene. Throughout his career, Chef Ali has also catered for celebrities Kim Kardashian, Lady Gaga, President Bill Clinton, Jay-Z and Johnny Depp. Today, his new restaurant “Streets,” serves global street food in Brooklyn NY.Roblé is currently at work on multiple projects, which include his signature fragrance,”Clique by Roblé”, a book, apparel line and philanthropic work focused on children (working with Harlem RBI, Project Sunshine & Brooklyn Community Services). On Thanksgiving each year he drives a food truck through all five boroughs of New York feeding approximately 5000 hungry people in need.