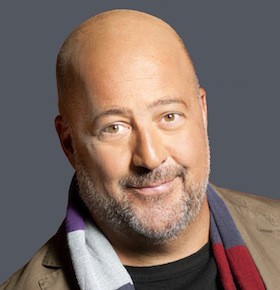 Would you risk your life for a scrumptious dinner? Renowned celebrity chef speaker and television personality Andrew Zimmern would and does so just about every day.  Pick any one of the hundreds of episodes from his four TV series and you’re sure to find Chef Zimmern fighting—yes literally fighting—for his dinner. His first show, Bizarre Foods with Andrew Zimmern, won the James Beard Foundation Award in 2010. In 2012 Bizarre Foods America attracted major attention for its focus on some of America’s unorthodox cuisine, and is still hugely popular today. His other series, titled Dining with Death, showcased the most deadly “foods” in the world, from poisonous snakes to venomous spiders. It’s not for the feint hearted.

In 2014, Andrew teamed with CHEFS Catalog to introduce his new line of premium cookware, equipment, and spices. He also launched Andrew Zimmern’s Canteen in 2012, a traveling food truck in which Andrew hand-picks a diverse and intriguing menu.

Chef Zimmern has also made multiple TV appearances including CNN’s Money and Health section where he described his miraculous personal recovery from alcohol addiction, and how he uses that to help others working for the charity SUS, or Services for the Underserved. He helps people with mental illness, addiction, HIV, and other barriers to employment to get back on their feet and make a recovery the same way he did.

Along with celebrity chefs Guy Fieri, Rachel Ray, Paula Deen, and Bobby Flay, Chef Zimmern was featured on Food Network’s The Best Thing I Ever Made for his award-winning fried chicken.  Andrew Zimmern also starred on an episode of Iron Chef America in which he was teamed with Masaharu Morimoto in a fierce battle against Bobby Flay and Marcela Valladolid, which they ended up losing by a hair. In 2012 he hosted and was on the board for the first ever “The Munchies: People’s Choice Food Awards” competition.