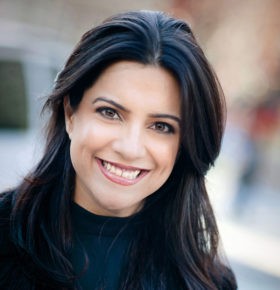 Keynote Speaker Reshma Saujani is a popular political figure in New York and the founder of Girls Who Code. Girls Who Code is a non-profit organization dedicated to supporting and growing the number of women in the computer science field. In 2013, Reshma published her first book titled Women Who Don’t Wait In Line: Break the Mold, Lead the Way. In it she discussed her thoughts on why women aren’t in more leadership positions in government and corporations. Reshma has since become a top featured Keynote Speaker for women’s events and leadership conferences. In 2015, Reshma was hired to provide the keynote speech at the 29th annual Entrepreneurial Woman’s Conference taking place in Chicago.

Inspirational Keynote Speaker Reshma Saujani was a Political Science and Speech Communication major at the University of Illinois before earning her Masters in Public Policy at Harvard and her Juris Doctor at Yale Law School. She worked as a lawyer in New York defending securities fraud cases before moving on to asset management and private equity. In 2008, Reshma served on the National Finance Board for Hillary Clinton during her run for president. That same year she was elected Vice-Chair of the New York delegation. In 2010, she became the first Indian-American woman to run for a seat in Congress when she went up against Congresswoman Carolyn B. Maloney in New York’s 14th congressional district.

Reshma has made appearances on a number of major TV programs and networks including MSNBC, CNBC and FOX. She has also written features for the Huffington Post. In 2011, Keynote Speaker Reshma Saujani shared her thoughts on women in the workforce at the annual TedxGotham event in New York.

Keynote Speaker Reshma Saujani is an active advocate for women’s equality in the workforce who continues to use her platform to empower other women to take risks and support each other both personally and professionally.