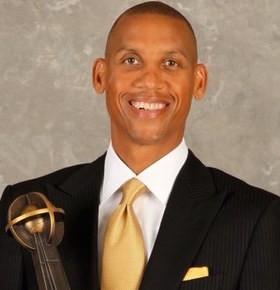 The NBA has had many iconic players throughout its exciting history but Reggie Miller is widely considered the best pure jump shooter of all time. Sports Speaker Reggie’s incredible performances in the playoffs against the rivaled New York Knicks and was a member of the Gold Medal-winning USA national basketball team at the 1996 Olympic Games in Atlanta. He currently sits in 2nd place on the all time 3-point shots made list after future Hall-of-Famer Ray Allen recently surpassed Reggie’s mark of 2,560 career 3’s made. After his illustrious career, Reggie joined the broadcast booth at TNT as a play-by-play announcer and was inducted into the Naismith Memorial Basketball Hall of Fame in 2012.

Sports Speaker Reggie played his entire 18-year career in the NBA with the Indiana Pacers after they picked him 11th overall in the 1987 NBA Draft. Before getting drafted, Reggie had been a stud for the UCLA Bruins in his college career and was already developing his reputation for hitting clutch baskets in the final seconds of games. He still ranks 2nd on the school’s all-time scoring list behind NBA legend Kareem Abdul-Jabbar. Reggie helped build the Pacers into a consistent playoff team in the 90’s and his late game heroics against the Knicks in both the 1994 and 1995 Eastern Conference Finals still haunt Knicks fans to this day. A documentary was made titled Winning Time: Reggie Miller vs. the New York Knicks, which detailed the sharpshooter’s storied history in games against his arch-nemesis. During his career he would make 5 All-Star appearances and was the 1st Pacer ever to start in an All-Star Game in 1995.

Following his retirement in 2005, Reggie announced he would become a part of the TNT broadcast team joining his sister Cheryl who is a sideline reporter for the network. That same year he served as the prestigious Indianapolis 500 Festival Parade Grand Marshal. In 2011, he also began working as a TV analyst for the Men’s NCAA Basketball Tournament. His other duties as a TV personality have included appearances as a guest host on Live with Regis and Kelly and The Dan Patrick Show.