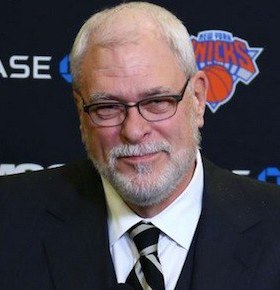 Sports speaker Phil Jackson is considered the greatest NBA coach of all-time. Phil won an unprecedented 11 NBA championships and coached some of the greatest players of all-time in the form of Michael Jordan with the Chicago Bulls and the Los Angeles Lakers duo Kobe Bryant and Shaquille O’Neal. His teams had winning records in every season during his 20 year career with the Bulls and Lakers and made the playoffs every year. Phil transcends the game of basketball as he is the only coach in any North American professional sport to win at least 10 championships, 13 overall if you include his days as a player.

Before Sports Speaker Phil’s record setting career as a coach he was also quite the player himself. He was the 17th overall pick in the 1967 NBA Draft and played 13 seasons with the New York Knicks and the New Jersey Nets. He won 2 NBA championships with the Knicks in 1070 and 1973. During the 1969-1970 season he sat out after having spinal surgery and authored a photo diary titled “Take It All” of the Knicks championship season. Phil was a masterful coach with the Bulls and Lakers as aforementioned and he perfected the strategy of the triangle offense.

Off the court Phil has written 3 books detailing his success the first in 2004 titled The Last Season: A Team in Search of Its Soul, Journey to the Ring: Behind the Scenes with the 2010 NBA Champion Lakers, and finally his latest Eleven Rings: The Soul of Success. His book in 2004 detailed the semi-falling out he and the Lakers had that forced Phil to retire only to be rehired halfway through the next season when his successor left the team for health reasons.