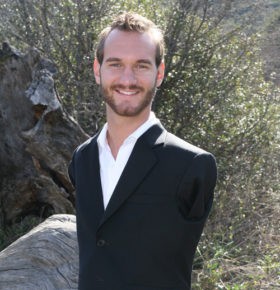 Motivational Speaker Nick Vujicic won’t let a rare disorder keep him from changing the world! Nick was born with tetra-amelia syndrome, a disorder characterized by the absence of all four limbs. In 2005, he established his own non-profit called Life Without Limbs. Nick’s Christian organization allows him to travel the globe as a Motivational Speaker for audiences of all ages. His story of hope and love inspires others to find that same joy in their own lives no matter the circumstances.

By the age of eight, Nick was already being teased in school and his condition left him with doubts of a sustainable future. Hu struggled to come to grips with his life. At times depression would sink in and Nick found himself at the brink of suicide. It was his faith in God that gave him new sense of hope for his life. At 17, his high school’s janitor persuaded him to start speaking to others about his faith and overcoming his adversities.

Initially speaking to small groups, Nick’s first big speaking engagement was in front of a crowd of 300 10th graders. He recounts a girl sobbing uncontrollably; she then asked if she could come on stage and give Nick a hug. She thanked Nick for his inspiring message, letting her know that she was beautiful just the way she was. This was a pivotal moment in Nick’s life. The young girl inspired him to travel the globe and share his story over 2000 times, reaching over 3 million people.

Motivational Speaker Nick Vujicic graduated from Griffith University with a double major in Accounting and Financial Planning. Soon after, he created his company: Attitude is Altitude, where he began to focus his time on motivational speeches. His speaking topics include battling bullying, dealing with adversity, dreaming big, leadership, and many others. Motivational Speaker Nick Vujicic speaks to students, corporate audiences, and church congregations of all sizes.

The multi-talented Motivational Speaker is also an actor, singer, and author. He has authored a book, Life Without Limits: Inspiration for a Ridiculously Good Life. Nick also released 2 DVD’s: No Arms, No Legs, No Problem! and Life’s Greater Purpose. Nick busted out his acting chops in the short film Butterfly Circus in which he portrays a disabled man who overcomes his predetermined career as a circus freak. His inspirational music video, Something More, has almost reached 5 million views on YouTube.

Motivational Speaker Nick Vujicic is an inspiring figure whose unique story continues to inspire millions at global events each year.