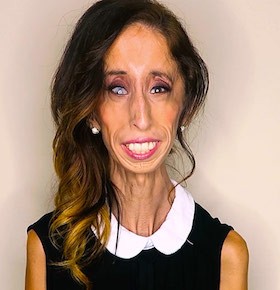 Celebrity Motivational Speaker Lizzie Velasquez is one of a kind. Not because of the way she looks, but because of the way she has accomplished her goals and dreams without letting anything stop her. Lizzie was born with a rare syndrome that makes it impossible for Lizzie to gain weight. At this time there are only 2 other people in the world that are known to be living with this rare syndrome. Lizzie was bullied during her childhood and she credits her parents and loved ones for instilling in her the courage and strength to be herself. Lizzie will ask you, “What defines you?” She refused to let the perceptions of other people define her and now she is sharing her story with the world on big stages.

Lizzie’s spirit and zest for life defines her. The negativity of others couldn’t stop her from reaching the goals she had set for herself including becoming a Motivational Speaker and an author. She graduated from Texas State University before beginning her journey as a Motivational Speaker. In 2010, she published an autobiography titled Lizzie Beautiful: The Lizzie Velásquez Story. Her second book, Be Beautiful, Be You, urged her readers to accept and love themselves for who they are. She has become one of the most popular TEDx Keynote Speakers including appearances at the TEDxYouth and TEDx Women events in Austin, Texas in 2013.

Her Kickstarter campaign, The Lizzie Project, was an overwhelming success in 2014. It went to help fund a documentary about her life titled A Brave Heart: The Lizzie Velasquez Story. The movie shares her life story from finding a YouTube video labeling her the ugliest woman in the world to now lobbying for anti-bullying legislation in the nation’s Capital. In 2015, Lizzie traveled to the South by Southwest Festival also held annually in Austin. In addition to providing a featured keynote speech, she was there to premiere her new documentary.

Celebrity Motivational Speaker Lizzie Velasquez is an inspiring anti-bullying advocate who has shared her story with audiences around the world.