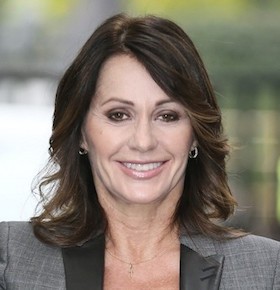 Sports Speaker Nadia Comaneci is a celebrated former gymnast, author, and businesswoman. Nadia is recognized as the first female gymnast in history to be given a perfect score of 10 in an Olympic gymnastic event. She is a 9-time Olympic medalist, having brought home 5 Gold Medals, 3 Silver Medals and 1 Bronze Medal during competition at the 1976 Olympic Games in Montreal, Canada and the 1980 Olympic Games in Moscow, Russia.

Nadia is now a highly sought after Keynote Speaker who speaks on topics including overcoming adversity, resisting complacency and the power of teamwork. She has provided keynote speeches for many companies, brands and organizations including All State, General Motors, IBM, Mazda, McDonalds, Samsung, and more. She is also a regular at health & fitness trade shows, available for meet-and-greet and autograph sessions. In 2015, Nadia was a featured panelist in a moderated Q&A at the Doha Goals Forum in Los Angeles discussing the importance of equal opportunities in sports for men and women.

Famous gymnastics coach Bela Karolyi took Nadia under his wing at an early age and enrolled her in his gymnastics training school. It wasn’t long before she was winning national tournaments and in 1975 she took home 4 Gold Medals at the European Championships. Sports Speaker Nadia Comaneci got her first taste of Olympic action in 1976 in Montreal where she became the first gymnast to score a perfect 10 in any event. At the conclusion of the 1976 Olympics, Nadia earned 7 perfect tens, 3 Gold Medals, 1 Silver Medal and 1 Bronze Medal.

Following her incredible performance, Nadia became a national hero in Romania and a global superstar. She soon appeared on the covers of TIME, Newsweek and Sports Illustrated magazines. She was the Associated Press’s 1976 Female Athlete of the Year. 4 years later, Nadia wowed the world again winning 2 Gold Medals and 2 Silver Medals at the 1980 Olympic Games. In 1996, Nadia was inducted into the International Gymnastics Hall of Fame.

Since her retirement from gymnastics, Sports Speaker Nadia Comaneci has published her own memoir titled Letters to a Young Gymnast. Along with her fellow Olympian and husband Bart Conner, Nadia has helped develop the Bart Conner Gymnastics Academy as well as a TV production company called Perfect 10 Productions. She has also helped develop their own gymnastics supply company called Grips. Her philanthropic work includes serving as a Board Member of Special Olympics International and the Vice President of the Muscular Dystrophy Association.

Sports Speaker Nadia Comaneci is available for a variety of personal appearances including meet-and-greets, keynote speaking engagements and autograph sessions.