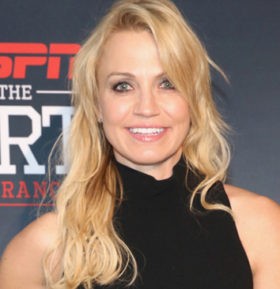 Sports broadcaster, television host, sideline reporter, and celebrity sports speaker, Michelle Beadle has been in the sports news circuit for almost twenty years, starting out hosting the show Big Game Hunters on Fox Sports Net. Beadle has also branched out into other areas of TV journalism as a host of travel shows and Red Carpet specials. Beadle is currently the co-host of SportNation on ESPN2. One of the most well-known female reporters in sports journalism, Beadle continues to make a name for herself in the world of sports.

Michelle Beadle has reported on a wide variety of different sports which has taken her to various venues, from sidelines of football games to “behind-the-chutes” at the Professional Bull Riders’ Bud Light Cup tour in 2002. From there, Michelle went on to work on such programs as CBS Sports and Titan Games on ESPN  which she co-hosted alongside Colin Cowherd, and several others. She also hosted Cathedrals of the Game which was a documentary series for Major League Baseball and co-hosted two episodes of the popular TV series Mike and Mike in the Morning.

Outside of the sports world, Michelle Beadle has hosted travel programs including Inside Orlando’s Resorts and Outrageous Room Service on the Discovery Channel as well as a Beach Week series on the Travel Channel. An avid animal lover, Michelle also hosted Animal Planet Report on the Animal Planet network. Beadle has appeared as a reporter on the Red Carpet for several awards shows including the Tony Awards, Grammy Awards, Golden Globes, and SAG Awards. Other television appearances include Access Hollywood, Entertainment Tonight, The Early Show, Extra, and The Today Show.