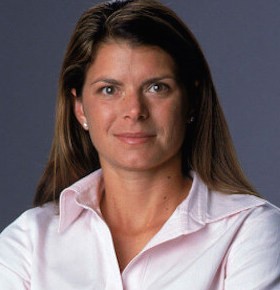 Mia Hamm is a former American soccer star who is considered to be the best female soccer player in history. Sports Speaker Mia played as a forward with the U.S. women’s national soccer team for 17 years, and was a founding member of the Washington Freedom. She won the Women’s World Cup in 1991 at the age of 19, becoming the youngest team member in history to win a World Cup, and went on to win it again in 1999. Mia won the gold medal at the 1996 Olympics, alongside teammates Michelle Akers, Brandi Chastain and Kristine Lilly, and they returned in 2004 to take the gold for a second time.

With her energetic and powerful presence on the field, Mia held the record for most international goals scored in the history of soccer, male or female, with her 151st goal for the U.S. team, until June 2013 when Abby Wambach, fellow American player, scored her 159th goal and broke the record. Mia is also the third most played female soccer player in history, appearing in 275 international matches, after fellow teammates Kristine Lilly and Christie Rampone. Mia was named the FIFA World Player of the Year in 2001 and 2002, and is one of only two women, and one of two Americans, listed as one of FIFA’s 125 Best Living Soccer Players (chosen by Pele), alongside teammate Michelle Akers. Celebrating her talent, Mia was inducted into the National Soccer Hall of Fame, the Alabama Sports Hall of Fame, the Texas Sports Hall of Fame and the World Football Hall of Fame. Mia is currently

As a testament to her experience and success, Mia authored Go For the Goal: A Champion’s Guide to Winning in Soccer and Life. She also appeared in the HBO Documentary Dare to Dream: The Story of the U.S. Women’s Soccer Team. Her powerhouse performance on the field matched with her charisma gave her the opportunity to sign endorsement deals with various companies including Gatorade, Nike, Dreyer’s Ice Cream, Pepsi, Nabisco, Fleet Bank, Earthgrains, Powerbar and Mattel. Mia’s other accolades include being named Soccer USA’s Female Athlete of the Year from 1994-1998, being awarded MVP of the Women’s Cup in 1995, and winning three ESPY Awards, including Soccer Player of the Year and Female Athlete of the Year.

Sports Speaker Mia Hamm established a huge fan base around her wildly successful career, as she was not only a highly talented and decorated athlete, but also someone to be admired and looked up to. In 1999, Mia founded The Mia Hamm Foundation, following the death of her brother Garrett in 1997, from complications from a rare blood disease called aplastic anemia. This non-profit organization strives to promote awareness and research and raise funds for families who are in need of a bone marrow or cord blood transplant, as well as empower women through sports. She truly emulates what it means to be a powerful woman, both on and off the field.