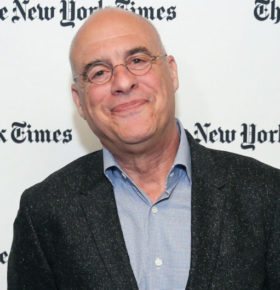 Celebrity chef speaker Mark Bittman might have focused on his cooking skills after graduated from Clark University, but he never really got into the chef status. However, he has become one of the most popular celebrity chefs in both the cookbook and cooking television worlds.

Celebrity Chef Bittman first began writing as a food columnist for the New York Times. His love for cooking and writing led him to publish his first book called Leafy Greens.  While his first book was popular, it wasn’t until his second book, How to Cook Everything, that celebrity chef speaker Mark Bittman became a name that was synonymous with cooking. His flagship book quickly became a New York Times Bestseller and inspired Chef Bittman to write follow up books for The How to Cook Everything series. Since then, Chef Mark Bittman has written more than fourteen books including his most recent publications, Mark Bittman’s Kitchen Express: 404 Inspired Seasonal Dishes You Can Make in 20 Minutes or Less and VB6: Eat Vegan Before 6:00 to Lose Weight and Restore Your Health . . . for Good which he released in 2013. His books have focused on a variety of topics, from easy recipes, to environmental challenges and proper food consumption and dieting. Bittman has won both James Beard Awards and International Association of Culinary Professionals Awards for his books.

Mark Bittman’s thoughts on cooking and food have led him to appear on NBC’s The Today Show and NPR’s All Things Considered. His latest TV cameos include guest judge spots on the Food Network’s popular cooking competition show, Chopped, as well as a weekly video blog for the New York Times. Contact us today to hire Mark Bittman for your next event today.