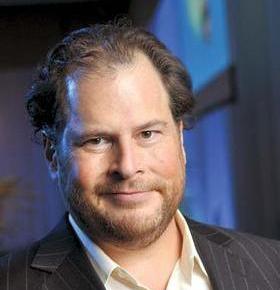 Business Speaker and technology entrepreneur for hire Marc Benioff is the founder, chairman and CEO of industry-leading cloud computing company Salesforce. He is a self-starter who built Salesforce from the ground up beginning in a San Francisco apartment back in 1999. Marc has been credited as a modern day pioneer of the software industry who championed strategies using the internet to improve how software is designed and distributed. He is now one of the most sought after business and technology speakers for annual industry conferences, corporate events and business summits. In January of 2017, Marc was hired as a featured keynote guest speaker at the World Economic Forum Annual Meeting 2017 held in Switzerland.

At the age of 15, business speaker Marc Benioff founded his first company called Liberty Software creating Atari video games. He eventually began earning royalties from published games that would pay for his business schooling at the University of Southern California. During college, Marc held an internship as a programer during the first years of Macintosh and Apple Computers where he was inspired by legendary entrepreneur and businessman Steve Jobs. His first job after graduation came with Oracle Corporation. He worked with the company for 13 years where he built a vast knowledge base in sales, marketing and product development. At 26, he was promoted to Vice President of the company becoming the youngest VP in company history.

As aforementioned, Marc began developing Salesforce in 1999. Salesforce is primarily a customer relationship management (CRM) with additional add-on technologies and functions the company acquired over the years. Salesforce is now considered one of the best companies in the software industry, having been named one of the World’s Most Innovative Companies 5 years in a row by Forbes Magazine and the World’s Most Admired Company in the software industry 8 years in a row by Fortune Magazine.

What’s more, Marc is an active community leader and philanthropist. He created a 1-1-1 model in his company of which he pledged to contribute 1% of equity, 1% of employee hours and 1% of product back to the communities the company serves. This philanthropic model has since been adopted by over 700 companies including Google. Marc was named 1 of Fortune Magazine’s 50 World’s Greatest Leaders in 2016 for his attention to social issues as a CEO. He has been involved in many initiatives striving specifically for equal pay for men and women in the workplace as well as defending the LGBT community from discriminatory policies.

Would your organization like to hire Marc Benioff to speak or make a personal appearance at your next event? Contact Celebrity Speakers Bureau today to hire Marc Benioff or another top keynote speaker to entertain and engage your audience at an upcoming corporate conference, speaker series, trade show or special event.