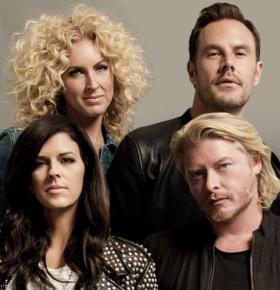 Country music artists and celebrity speakers Karen Fairchild, Kimberly Schlapman, Phillip Sweet and Jimi Westbrook are the talented singers that make up the Grammy Award winning group known as Little Big Town. Although the group has been performing together for more than a decade, they really started to become known in the country music world after the release of their second album, The Road to Here, which they released in 2005. The Road to Here went on to become the band’s first album to go Platinum and one of the singles from the album, Bring It On Home, was their first song to make it to the Top 5 on the Hot Country Songs chart.

Following the success of their second album, Little Big Town began touring with fellow country music artists including Keith Urban’s Still Alive tour in 2006, The Waking Up Lauging Tour with Martina McBride in 2007 – 2008, was the opening act for Carrie Underwood’s Carnival Ride Tour in 2008, and finally began their first tour as the headliner in 2009. Since then, Little Big Town has toured with countless country stars including Zac Brown Band, Sugarland, Matt Nathanson, Miranda Lambert, Rascal Flatts, and Kacey Musgraves.

In 2012 the group released the song Pontoon as the lead single to their fifth album, Tornado. The song made its way to the top of the Hot Country Songs chart and became the band’s first Number One hit. Pontoon also earned Little Big Town its first Grammy Award for the Best Country Duo/Performance award in 2013 at the 55th Grammy Awards. In 2014, Reba McEntire invited the group to join the Grand Ole Opry after they released their sixth album, Pain Killer. Throughout the group’s career thus far, they have won several other awards as well, including two Country Music Awards, three Academy of Country Music Awards, an American Country Award and a Daytime Emmy Award. Little Big Town has also appeared on several television programs including The View, The X Factor, Late Night with Conan O’Brien, The Ellen DeGeneres Show, and many others.