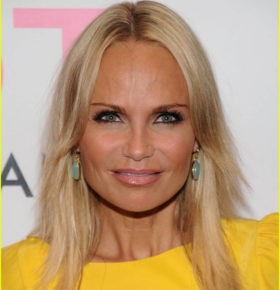 With a height of four feet eleven inches, Kristin Chenoweth may be a tiny woman but she sure packs a lot of punch in her performances as an actress, singer, and celebrity speaker. Beginning her career over twenty years ago, Chenoweth has performed in theater productions on Broadway, in feature films, and on television. Kristin’s Broadway appearances include roles in Steel Pier, You’re a Good Man, Charlie Brown, Epic Proportions, Wicked, The Apple Tree, Promises, Promises, and most recently, On the 20th Centurt. For her portrayal of Sally Brown in You’re a Good Man, Charlie Brown, Chenoweth won her first Tony Award for Best Performance by a Featured Actress in a Musical.

Chenoweth is perhaps better known for her recurring roles on television shows and made for TV movies. From 2004 through 2006 she starred in the critically acclaimed political drama series, The West Wing, where she played Deputy Press Secretary Annabeth Schott. Kristin has also starred in Sesame Street, Ugly Betty, Pushing Daisies, Hot in Cleveland, the hit musical series Glee, and in The Good Wife where she starred alongside award winning actress Julianna Margulies and Chris Noth. Chenoweth has been nominated for four Primetime Emmy Awards and finally won her first in 2009 for Outstanding Supporting Actress in a Comedy Series for her role in Pushing Daisies. She has also been nominated for two other Emmy’s, a People’s Choice Award, and won a Satellite Award for her portrayal of April Rhodes in Glee.

TV movies in which Kristin starred include Legally Mad, Annie, Seven Roses, The Music Man, and the Lifetime movie, 12 Men of Christmas. On the big screen, Chenoweth has starred in several comedy films including the 2005 film, Bewitched, where she joined costars Nicole Kidman, Will Ferrell, Shirley MacLaine, and Steve Carell. Other films include RV, Deck the Halls, Four Christmases, and You Again.  Also and author, Chenoweth’s memoir, A Little Bit Wicked: Life, Love, and Faith in Stages, became an instant New York Times Best Seller.