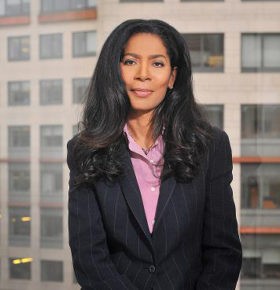 Judy Smith is one of the nation’s most accomplished women.  She’s risen to power through her intellect and bevy of contributions and accomplishments.  Judy has earned a reputation for being extremely intelligent, honest, and straightforward with her work.  These qualities have allowed her to rise to great heights including the White House.

Motivational Speaker Judy Smith graduated from Boston University and later attained a law degree from American University.  Motivated from her time in D.C., Smith began her career in public office.  In 1991 she was appointed as Special Assistant and Deputy Press Secretary to President George H.W. Bush.  Here she began to garner a reputation as an elite crisis manager with a tremendous ability to control damage to reputations. During her time in the White House she was integral in controlling multiple crises including the nomination of Clarence Thomas, the 1991 Gulf War and the Iran-Contra Affair.  Following her time at the White House, Judy began her own crisis management firm called Smith & Company.  Some of her high profile clients include Michael Vick, Wesley Snipes, and Monica Lewinsky.  Judy is also the VP of Communications for NBC and is responsible for news, sports and entertainment television.  In 2012 Judy was named one of the Executive Producers for the show Scandal, which is a political thriller based on her experiences at her crisis management firm and the White House.  In addition she is also a blogger/writer for the Huffington Post and ABC Television.

Judy Smith is also a very accomplished speaker.  In 2013 she delivered the commencement speech for the Boston University College of Communication, and has also spoken at Howard University and Syracuse University about her show Scandal.