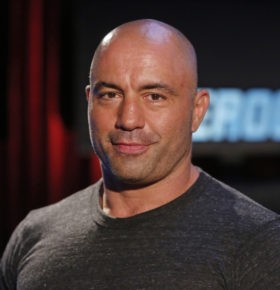 Celebrity speaker Joe Rogan is one of the most colorful personalities in the world of entertainment.  He has spent time doing a variety of professions including work as a comedian, actor, writer, color commentator, and entrepreneur. He currently boasts more than 6.5M Instagram followers, 5 million Twitter followers, and 5.4M subscribers on YouTube.   Rogan began his career in entertainment as an actor for the FOX series Hardball and followed that with a role in the NBC comedy series NewsRadio from 1995-1999.

Celebrity Speaker Joe has also made a living as a stand-up comedian.  He has gone on multiple tours around the world and has several recorded albums and pieces.  His comedy style is at times raunchy and direct.  Rogan’s longest tenure on national television came as the host for the reality television series Fear Factor.  He hosted the original series for 6 seasons from 2001-2006, which was the NBC counterpart to The Survivor.  The series was revived and hosted by Joe Rogan for 8 episodes in December 2011 but was canceled after just a single season.

Joe Rogan has also been a major player in the world of Mixed Martial Arts and the Ultimate Fighting Championships. The celebrity speaker began working with UFC in 1997 and continues to this day.  Currently, he hosts UFC events and conducts prefight and post-fight interviews.  He is also the primary color commentator for all UFC events.  Rogan was named the  “MMA Personality of the Year” at the 2011 MMA Awards.  Joe also hosts a comedy podcast that is now on iTunes called The Joe Rogan Experience. The podcast has been extremely well received and finished 2012 as one of the top 3 comedy podcasts on iTunes, making him a superb choice for product endorsements for millennials. The Joe Rogan Experience has become one of the most watched podcasts in the world and in January 2019 won the iHeartRadio Podcast award for Best Comedy Podcast. Rogan is married with two young children.  He has also previously spoken for a variety of private events.  Additionally, Rogan follows a vigorous MMA training regimen and he has done various interviews about his intrigue with the human conscious. Joe stays busy with his craft and is currently on a summer stand up a tour that travels across the country.

JOE ROGAN ENDORSEMENTS: Rogan is not affiliated with any political party but was described as having mostly libertarian views. He supports gay marriage, gay rights, women’s rights, recreational drug use, universal healthcare, and universal basic income, while also supporting the Second Amendment.

Rogan supports the legalized use of cannabis and believes it holds numerous benefits. He hosted the documentary film The Union: The Business Behind Getting High and was featured in Marijuana: A Chronic History and The Culture High, making him a superb choice for cannabis endorsement.

WORK WITH JOE ROGAN: Would your organization like to hire Joe Rogan for an endorsement, public relations campaign, or one of a kind appearance at your next conference or special event? Contact Celebrity Speakers Bureau today to hire Joe Rogan or another great celebrity speaker via email at booking@celebrityspeakersbureau.com .