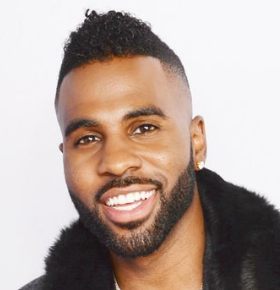 Jason Derulo is an American singer-songwriter with smooth dance moves whose singles Whatcha Say, Ridin’ Solo, In My Head, Talk Dirty and Want to Want Me have helped elevate him to one of the most popular hip-hop and R&B artists in today’s music scene. Jason’s commitment to becoming a solo artist and bettering his craft has given him a reputation in the industry for almost unrivaled dedication and hard work.

Before becoming a hit himself Celebrity Speaker Jason was a ghost-writer for many big names in hip-hop and R&B including Lil Wayne, Pitbull, and Cassie. His first single Whatcha Say sold 5 million digital copies in May of 2009 and peaked at #1 on the Billboard Hot 100 chart in the United States and New Zealand. Jason’s first album containing his first three big hit songs was self-titled Jason Derülo and released in early 2010 while Jason was opening for Lady Gaga’s The Monster Ball Tour. The album as well as his single In My Head won Teen Choice Awards that year and this lead to Jason’s first tour as a headlining act. His second album Future History was to feature its own tour in the United Kingdom before Jason broke a vertebra in his back and was forced to cancel the tour. Jason’s music collaborations include the likes of Demi Lovato, 2 Chainz, and Jordin Sparks and his third album released in late 2013 entitled Tattoos will be followed by his second tour as a solo headlining artist. His song Talk Dirty featuring 2 Chainz has already reached triple platinum status by the RIAA certification. His fourth studio album, Everything Is 4, was released on June 2nd, 2015, including his top song Want to Want Me.

Jason has been involved with multiple charities while enjoying his music success including joining multiple well-known bands and artists to design special edition Converse shoes that were auctioned off by Warner Music Australia to benefit the National Breast Cancer Foundation.