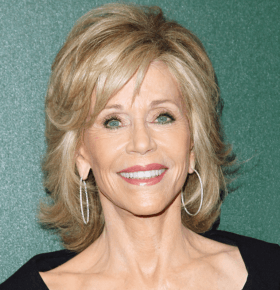 Jane Fonda is a women’s health keynote speaker, author and award winning actress who’s equally impressive collection of 23 workout DVDs has sold over 17 million copies! After finding fame as an actress on Broadway and in films during the 1960’s, Jane released her first workout video in 1982 which is now the highest selling workout DVD of all time. Her most recent workout DVD releases in 2010 were centered around workouts for an older demographic. In recent years Jane has returned to her first love, acting, and is set to star alongside Lily Tomlin in a new Netflix series titled Grace and Frankie debuting in 2015.

Jane is a natural beauty with a warm personality to match. Her acting career was prefaced by a brief modeling career that including 2 appearances on the cover of Vogue magazine. She got her first taste of the spotlight on Broadway with a role in There Was A Little Girl, for which she received a Tony Award nomination. Her portrayal of Kitty Twist in Walk on The Wide Side in 1962 earned her the Golden Globe that year for Most Promising Newcomer. Her first true box office success was the comedy western Cat Ballou in 1965. Her long list of successful films in the following years include Barbarella, Fun With Dick and Jane, and Monster In Law. She has won 2 Oscars for Best Actress for her work in Klute and Coming Home.

Jane has gotten behind philanthropic efforts to raise awareness about feminist issues including reproductive health and violence towards women. She founded the Jane Fonda Center at Emory University which conducts research and educates adolescents about reproductive health. Jane has been recognized for her lifetime of success in not only her career but also as a philanthropist. In 2009 she was awarded the New York Women’s Agenda Lifetime Achievement Award. In June of 2014 she was awarded the American Film Industries Lifetime Achievement Award.

Jane’s latest philanthropic efforts have occurred in June, 2015 when she took a trip to Vancouver and other cities around the Northwest coastline of North America. During her trip she did multiple TV, radio, and print interviews per claiming the necessity to stop Shell, and other oil companies that are beginning to drill in Alaska due to the damage to the wild life and ecosystems of the North America’s northwest coastline.

Would your organization like to hire Jane Fonda to make a personal appearance at your next event? Contact Celebrity Speakers Bureau today to hire Jane Fonda or another top Keynote Speaker to entertain and engage your audience at an upcoming corporate conference, speaker series, trade show or special event.