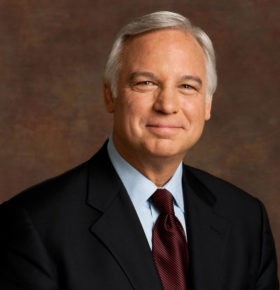 Motivational Speaker Jack Canfield is a celebrated American author, entrepreneur and thought leader who specializes in corporate training and personal growth. Jack is best recognized as the co-author behind the bestselling Chicken Soup for the Soul book series with more than 250 titles and 123 million copies sold worldwide. The Chicken Soup for the Soul books are a collection of inspirational stories tailored to motivate and encourage readers of different demographics. The franchise has since branched out into food production and TV programming.

Aside from this successful franchise, Jack has become a leading expert on performance building techniques for c-level as well as entry level employees. He is the founder of the Transformational Leadership Council, an international organization and community of trained professionals offering transformational leadership through workshops, seminars, keynote speaking engagements and special events. He has worked with several major clients including Merrill Lynch, General Electric, Accenture and Sony Pictures.

Jack also founded The Canfield Training Group based in Santa Barbara, California. This group helps train individuals for accelerated success using the principles laid out in Jack’s bestselling book The Success Principles: How to Get From Where You Are to Where You Want to Be.

Motivational Speaker Jack Canfield is an inductee of the National Speakers Association’s Hall of Fame and has twice been recognized as Business Digest’s Motivator of the Year. His ability to connect and inspire others to achieve their goals has earned him the title as America’s #1 Success Coach. Since his rise to fame, Jack has appeared as a guest on numerous major news networks and programs including The Today Show, The Oprah Winfrey Show, CNN and MSNBC just to name a few.