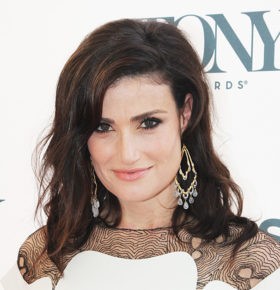 Idina Menzel is a woman of many talents. The actress, singer, songwriter, and voice actress is as well-known for her vocal performances as she is for her appearances on Broadway and for her role as Queen Elsa in Frozen. Menzel was honored with the Breakthrough Artist Award at the 2014 Billboard Women in Music award ceremony. She is now on a world tour.

Celebrity speaker Idina Menzel’s breakout role came in the mid-nineties when she landed the part of Maureen Johnson in the Broadway musical, Rent. Menzel played the character for several years, receiving her first Tony Award nomination for Best Featured Actress in a Musical. From there, Idina went on to star in several other hit Broadway productions including Hair and Aida. In 2003 she landed the role of Elphaba in the Broadway show, Wicked, which she continued to portray until the production concluded in 2005. In 2004, Idina Menzel won her first Tony Award for Best Performance by a Leading Actress in a Musical for her role in Wicked. Menzel made her return to Broadway in the 2014 musical If/Then, which earned her a nomination for the Tony Award for Best Actress in a Musical.

While continuing to perform on Broadway, Menzel also pursued her career as a singer and debuted her first album, Still I Can’t Be Still, which she followed up with her second album in 2004, entitled Here. In 2008 Idina released her third album, I Stand, with Warner Brothers which peaked at number 58 on the music charts in the United States.

Throughout her acting career, Idina Menzel has appeared in several big name films including the motion picture adaptation of the Broadway musical, Rent, for which she received several Awards nominations. She also starred in the 2007 film, Enchanted, with costars Patrick Dempsey, Amy Adams, Susan Sarandon, and Rachel Covey. In 2013, Menzel’s majestic voice was heard by millions as the voice of character Queen Elsa in the Disney animated film, Frozen. The film went on to break box office records, winning the Golden Globe for Best Animated Feature Film and receiving Academy Awards nominations for Best Animated Feature and Best Achievement in Music Written for Motion Pictures, Original Song, for the song, Let It Go, sung by Idina Menzel.