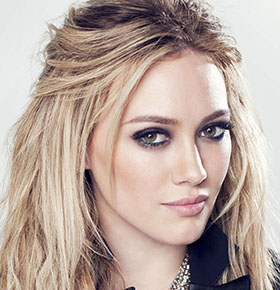 Getting her start in the entertainment industry acting in television commercials and other small roles, Celebrity Speaker Hilary Duff caught her big break as an actress in 2000 when she auditioned for the main character in the Disney Channel series Lizzie McGuire. Duff landed the role and she went on to star in sixty five episodes, making Lizzie McGuire one of Disney’s top series averaging an audience of 2.3 million viewers per episode. The series spawned a motion picture and in 2003, Hilary Duff played the title character in The Lizzie McGuire Movie, it was the first time the Disney Channel made a theatrical film based on an original series.

Following the film, which served as the conclusion of the Disney series, Duff continued to pursue a film career. In 2003, she starred in Agent Cody Banks with actors Frankie Muniz, Angie Harmon, and Darrell Hammond, followed by the film Cheaper by the Dozen in which she joined award winning actor Steve Martin, Bonnie Hunt, and Ashton Kutcher. In the following years, Hilary would go on to star in several other films including A Cinderella Story, Cadet Kelly, Raise Your Voice, Cheaper by the Dozen 2, and Material Girls where she served as producer and acted alongside sister Haylie Duff.

Along with her film career, Celebrity Speaker Hilary Duff did not stray far from the small screen, appearing in several television series throughout the years, including George Lopez, American Dreams, The Andy Milonakis Show, Ghost Whisperer, Law & Order: SVU, Raising Hope, Two and a Half Men, and Community. She also had a recurring role on the hit teen drama series Gossip Girl, where she starred alongside actors Blake Lively, Leighton Meester, Penn Badgley, Chase Crawford, and Ed Westwick.

Celebrity Speaker Hilary Duff is also a singer-songwriter in the pop music genre. She has released five studio albums; her first was Metamorphosis in 2003 which went RIAA-certified triple platinum. Duff also released the album Hilary Duff in 2004, Most Wanted in 2005, and Dignity in 2007. Many of her songs went on to become hits on Billboard’s top 200 and all of her albums made Billboard’s Year-End 200 Album list. Signing with RCA Records in 2014, she recently released her fifth studio album, Breathe In. Breathe Out.

Her latest endeavor is writing. Her first book, Elixir, was published in 2010 and became a New York Times best-seller. Duff followed that up with two more novels, Devoted in 2011 and True in 2013. She also has a clothing line and bestselling fragrance called With Love…Hilary Duff.