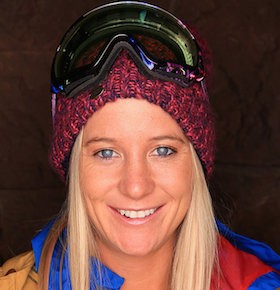 Sports Speaker Hannah Teter was a snow bunny from birth. Born in Vermont to two skiers, Hannah learned how to snowboard when she was just 8-years-old. The youngest of five, Hannah has two older brothers who were on the U.S. snowboarding team and an older brother who was their agent and manager. Now Hannah is the golden child, having won her first Olympic Gold Medal in halfpipe at the 2006 Olympic Games in Turin, Italy. She brought home a Silver Medal at the halfpipe event I nthe 2010 Olympic Games in Vancouver, Canada. In addition to her incredible Olympic performances, Hannah has won a total of 6 X Games medals and 6 World Cup victories.

Sports Speaker Hannah Teter made her professional snowboard debut at the age of 15 where she became the World Junior Halfpipe Champion and earned 4th at her first World Cup event. In 2005, she won the bronze medal at her first FIS World Championships followed in 2006 by her Gold Medal halfpipe win at the Winter Olympics. She won the ESPY for Best Action Sports Female that year. Hannah took a 3-year hiatus after her Olympic win to focus on her humanitarian causes but returned in 2010 to win a silver medal at the Winter Olympics. She placed 4th recently at the 2014 Winter Olympics.

Hannah’s interests stretch far beyond the halfpipe. In 2008, the Sports Speaker created Hannah’s Gold, which partners with World Vision to raise money through the sales of Vermont maple syrup. Hannah’s Gold aims to help support a village in Kenya by building schools, creating fresh water wells and by providing water filtration. In 2015, Sports Speaker Hannah Teter served as a featured keynote speaker at the Doha Goals Forum in Los Angeles. She was a panelist during a moderated Q&A session talking about the power of sports to help raise the potential of emerging economies.

In 2010, Ben & Jerry’s teamed up with Hannah to create her own limited edition flavor called “Maple Blondie” with a portion of sales going to Hannah’s Gold. Later that year she launched Sweet Cheeks, an underwear line that donates 40% of sales to Children International to help feed children living in extreme poverty. In 2014, Hannah won the Do Something Athlete award at the VH1 Do Something Awards for all her philanthropic work and was named the Global Ambassador for the Special Olympics.

Sports Speaker Hannah Teter has used her platform as an elite athlete to bring attention to communities in need around the world.