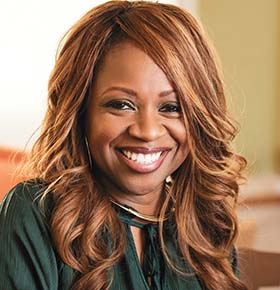 Celebrity Chef Gina Neely and her ex-husband, Chef Patrick Neely were high school sweethearts. However, they wouldn’t realize that their passion for cooking could take them so far after they reunited during a high school reunion in the mid-nineties. Chef Pat was the driving force behind the restaurant status that the couple has today, opening his first restaurant with his brothers. He would open a second restaurant only a few years later. Celebrity Chef Gina Neely would come to handle the catering side of Pat’s restaurants, which now accounts for nearly 25% of overall revenue.

Chef Gina first began shooting their television show, Down Home with the Neelys for a local television station. After being noticed by Celebrity Chef Paula Deen who took the reins and recommended the couple to her producers at Food Network, they finally caught onto the show and decided to premiere it on their network in 2008. Down Home would quickly become one of the highest rated weekend series on the hit cooking network. Chefs Pat and Gina Neely would continue their success with a cookbook also called Down Home with the Neelys: A Southern Family Cookbook, which made its way to the New York Times best seller list. Their second book, entitled The Neelys’ Celebration Cookbook: Down-Home Meals for Every Occasion, was released in November of 2011, and was greeted with the same success as their original publication. Chef Gina regularly give cooking demonstrations and appearances for organizations around the country, giving audiences a taste of down home cooking.