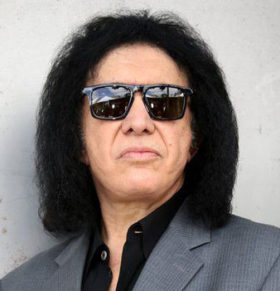 For the majority of his life Gene Simmons was the quintessential rock star, but over the years he’s evolved into a figure that is universally recognized.  The man that everybody once recognized for his costumes, face paint and guitar playing has transformed himself into a television personality, political activist, and celebrity speaker.  Simmons was born in Israel before immigrating to the United States at the age of 8 and is large supporter of the Jewish State.

Celebrity Speaker Gene is most notable for his time with the rock band Kiss in the 1970’s and 80’s.  Simmons character in the band was called ‘The Demon’ and his familiar face paint and bass guitar were his key attributes.  Kiss was a worldwide sensation selling out concerts all over the world on a multitude of tours and appearances.  The band went on to sell over 100 million albums worldwide while Simmons was at the helm.  After his music career Simmons retreated to civilian life before starring in a reality television show with his family called Gene Simmons Family Jewels.  The show aired on the A&E network in 2006 and was a large success for the network, and lasted for 7 seasons until finally ending in 2012.  Simmons has also played a role in the Guitar Hero video game series where he narrates in the game Kiss songs are featured.  Apart from his life as a public entertainer, Gene has developed a reputation as political activist.  He’s openly supported the foreign policy of the Bush Administration, and is a strong supporter of his native Israel.  In addition Gene is a well known philanthropist.  He is an advocate for ChildFund International and sponsors over 140 children.  In 2013 Gene received MEND Humanitarian Award for supporting Mending Kids International.